There are two monuments to the 28th Pennsylvania Volunteer Infantry Regiment on the Gettysburg battlefield. The original monument on Slocum Avenue was dedicated by the State of Pennsylvania in 1885. (Culp’s Hill North tour map)  A second monument, dedicated in 1904, is near Rock Creek off South Confederate Avenue. It shows the regiment’s position on the morning of July 2nd. (East Confederate Avenue tour map)

The 28th Pennsylvania was commanded at the Battle of Gettysburg by Captain John H. Flynn. It brought 370 men to the field, losing 3 killed, 23 wounded and 2 missing.

Lieutenant John P. Nicholson of the 28th Pennsylvania would go on to become the Chairman of the Gettysburg National Park Commisssion and is honored by a monument on Hancock Avenue.

Original monument to the 28th Pennsylvania Infantry on Slocum Avenue

The rough-hewn stone monument is inset with a bronze tablet. It is dominated by the five pointed star that is the symbol of the Union 12th Corps. A carved stone forage cap is in the center of the base.

From the front of the Slocum Avenue monument:

Arrived at 3 p.m. July 1st and went into position on the ridge north of Little Round Top at 6.30 a.m. July 2nd moved to Culp’s Hill where the Regiment was advanced to Rock Creek to support the skirmish line. At dark retired and moved with the Brigade returned at about 3 a.m. July 3rd and at 8 a.m. relieved the troops in the breast works. Was relieved in turn and again advanced and occupied the works from 4 p.m. to 10 p.m.

The original monument to the 28th Pennsylvania at Gettysburg is on the west side of Slocum Avenue about 280 yards north of the intersection with Williams Avenue. Slocum Avenue is one way northbound. (39°49’09.0″N 77°13’12.5″W)

When the State of Pennsylvania made funding available for Civil War monuments it was decided to use the money to erect a second monument near Rock Creek off South Confederate Avenue, showing the regiment’s position on the morning of July 2nd. The monument was dedicated in 1904.
The monument is in the form of an upright stone knapsack on a pedestal. The five-pointed star of the Union 12th Corps is in the center of the base. 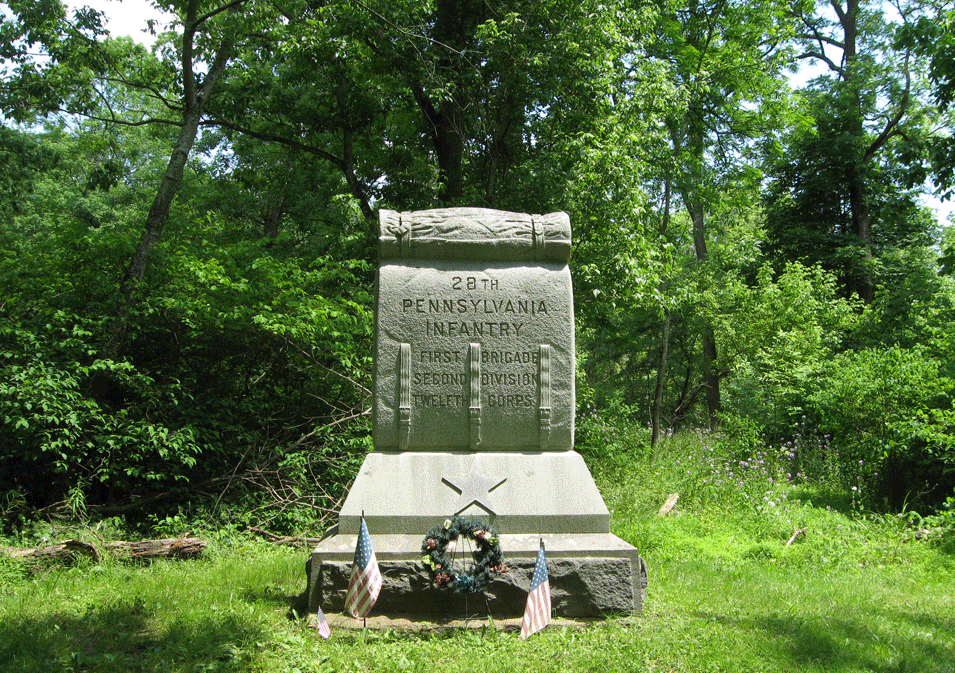 Monument to the 28th Pennsylvania on Rock Creek

From the front of the monument near Rock Creek:

From the tablet on the rear of the monument:

The regiment took position here July 2nd abut 8 a.m. Deployed as skirmishers and was engaged with the enemy during the day. Remained until 7 p.m. when it was ordered to rejoin First Brigade.

Trail to the 27th Pennsylvania monument on Rock Creek