The house of Mary Thompson, also known as Lee’s Headquarters, is on the north side of Chambersburg Road (US 30) on Seminary Ridge on the west side of Gettysburg.

Michael Clarkson built the stone house in 1833. Joshua and Mary Thompson became tenants along with their eight children. Joshua, however, was a drunk who left Gettysburg and died sometime in the 1840s. In 1846 Clarkson ran into financial difficulties. His good friend, future Republican Congressman Thaddeus Stevens, purchased the house at a Sheriff’s auction in trust for Mary Thompson. They would be co-owners until Stevens’ death in 1868.

Today the house has been restored by the Civil War Trust to its appearance at the time of the Battle of Gettysburg. Several interpretive markers tell the story of the house, the land, the people and their history.

The Mary Thompson house, known as Lee’s Headquarters, on the Gettysburg battlefield.

The Thompson house during the Battle of Gettysburg

At the time of the Battle of Gettysburg Mary was 70 years old. Her children were all grown and had moved out, but her son, James Henry Thompson, lived across the road. His house is also still standing today.

The area around the widow Thompson’s house was one of the bloodiest places on the battlefield on July 1. Supported by Stone’s Pennsylvania brigade, half of Battery B, 4th United States Artillery deployed on the west side of the property where the battery’s monument is today, pouring canister into Scales’ North Carolina Brigade. Every field officer in Scales’ Brigade but one was killed or wounded and the 13th North Carolina Infantry Regiment was reduced from 180 to 30 men. Dozens of men from the 143rd Pennsylvania were captured in the railroad cut while trying to escape to Cemetery Hill as the Union defensive lines collapsed.

Mary Thompson stayed on at the house in spite of the danger. When the Union survivors retreated and the fighting moved on into the city her house became a hospital for the men of both sides. Mary and her neighbors cared for the wounded.

Why did the house become Lee’s headquarters?

The house was an excellent candidate for Robert E. Lee’s headquarters. It was very visible, next to the main road coming into Gettysburg from the west, on which the rest of Lee’s army would arrive after July 1. The house was at the top of a ridge with an excellent view in all directions. (see the Fighting and Photographs wayside marker) And it was at the center of the Confederate lines. Although Lee spent much of his time in the saddle at Gettysburg, he is known to have taken a meal and slept in the house on July 1. Even when Lee was not personally present, the house was the communications center where messengers brought news of the battle to Lee’s staff and took away orders.

View of the Thompson house from the parking area. There are five interpretive markers on the grounds, which are open to the public. The foundation on the right is from barn of neighbor James Dustman, whose non-historic upper structure was removed during the renovation of the area.

Mary was left with little more than the empty stone house. Her linens were used for bandages, her carpets buried with the dead, and her fences gone for firewood. Mary left Gettysburg for a time after the battle, but returned and lived in the house until her death in 1873.

The house went through some hard times. In 1896 a fire burned the interior, although the stone shell was unharmed. In 1907 its tenant was arrested for keeping a bawdy house.

Chambersburg Road became part of the Lincoln Highway in 1913, bringing tourist traffic. The house became the General Lee’s Headquarters Museum in 1921. A campground and tourist cabins were added. As time went on the museum became the center of a thriving complex that would eventually include a popular restaurant and motel with swimming pool.

In 2015 the Civil War Trust acquired the Thompson House and 4 acres on Seminary Ridge. The Trust removed all non-historical structures and nonessential parking. The ground was returned to its historical contours, and an apple orchard is being replanted. The house itself was returned to its 1863 look. This was known through the many photographs and descriptions from the time. It even includes the doghouse, seen in several period photos. A trail with interpretive markers was laid out through the grounds. The restoration was lately complete by October of 2016.

View looking west down Chambersburg road (US 30). Three wayside markers can be seen to the right of the Thompson house. 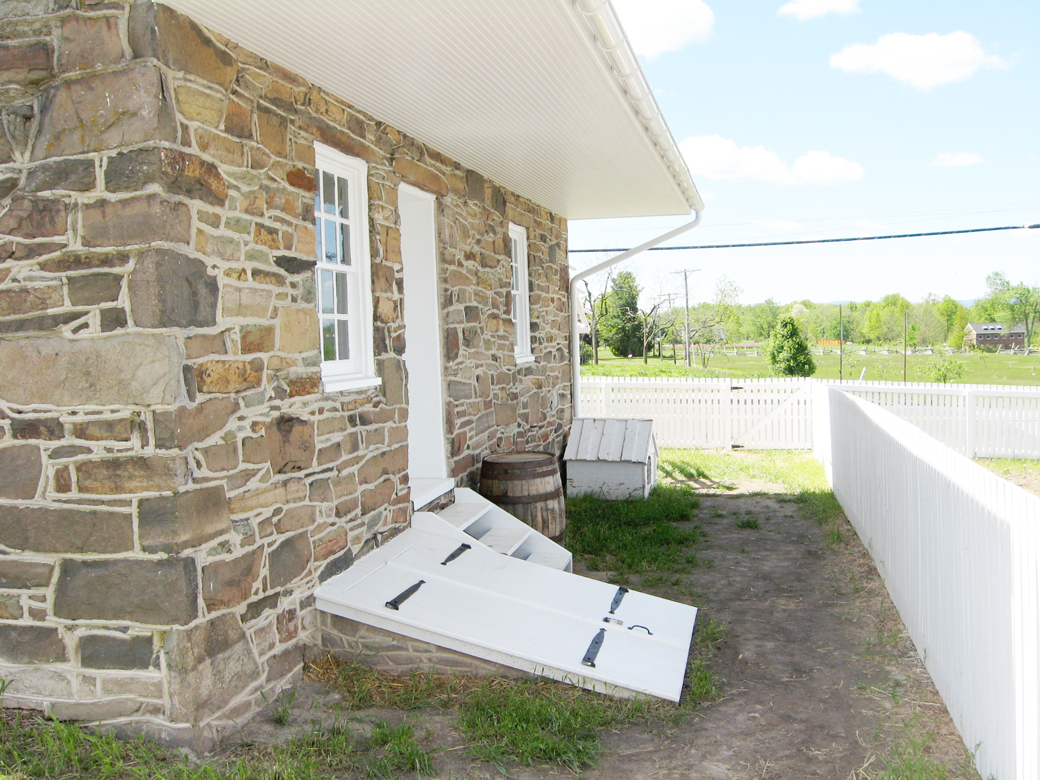 Behind the Mary Thompson House. The house was well photographed just days after the battle, and the Civil War Trust took great pains to restore it as closely as possible. 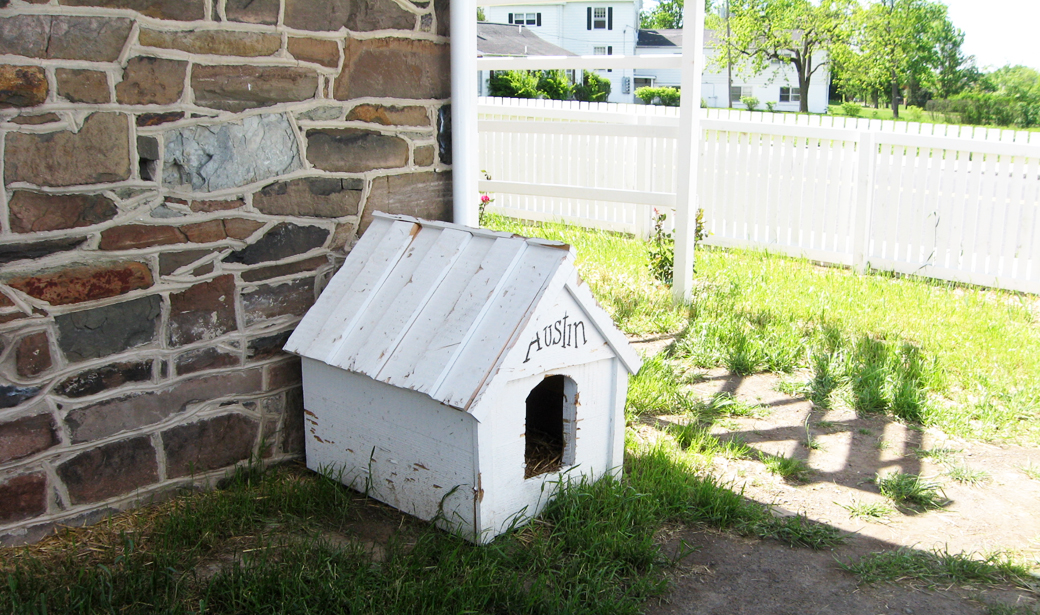 Including the dog house.

Location of the Thompson House (Lee’s Headquarters) at Gettysburg