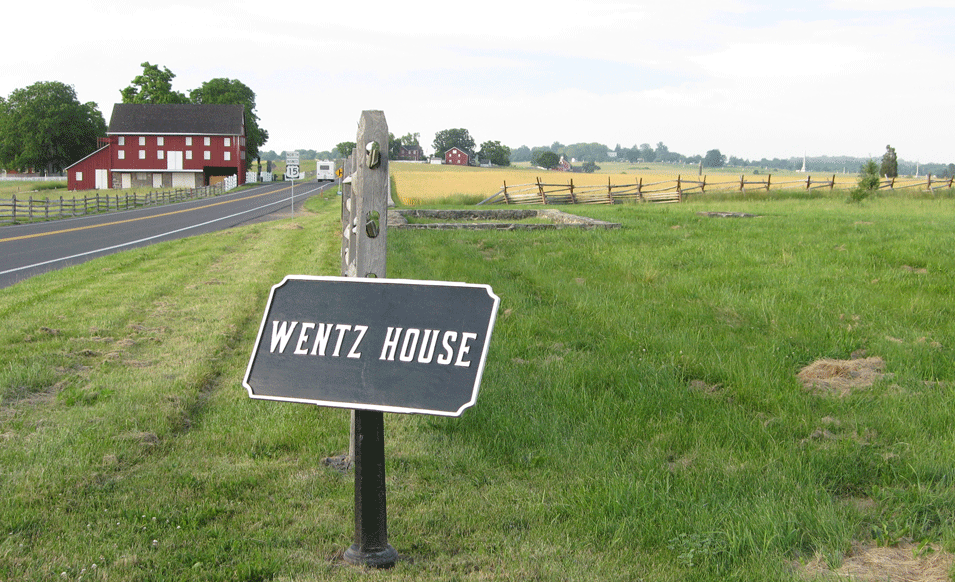 The Wentz farm site at Gettysburg is just north of the Wheatfield Road on the east side of Emmitsburg Road.  John and Mary Wentz and their daughter Susan lived here in a log farmhouse. (Peach Orchard tour map)

The older Wentzes were in their seventies at the time of the battle. It raged around their farm on July 2nd as John rode out the fighting in the cellar. The Wentz’s son, Henry, had moved to Martinsburg, Virginia (now West Virginia) before the war. He returned to Gettysburg during the battle with Lieutenant Osmand B. Taylor’s Confederate artillery battery. (Pfanz, Gettysburg-The Second Day, p. 118) There is a legend that Henry commanded a battery that shelled the farm and that he was killed and buried there. But the reality is he was only a sergeant, and he survived the war. Taylor’s battery did fire on the nearby Peach Orchard and it did deploy along Emmitsburg Road a short distance north from Henry’s boyhood home. After the fighting died down Henry found his father sleeping in the cellar of the relatively unscathed house.

John Wentz sold the farm in 1869 and died in 1870, followed by his wife and daughter. John Beecher, a carpenter, came to own the farm. He tore down the old log structure and built a wood frame building on the foundation. The War Department purchased the farm in 1908 to include in the battlefield park. In 1960 the National Park Service removed the non-historic house, as funds to rehabilitate it were not available.

The photo looks north along Emmitsburg Road, with the Sherfy barn to the left and the Klingle farm ahead to the right in the distance. On the treeline at the far right can just be made out the white shaft of the U.S. Regulars monument on Hancock avenue, with the Copse of Trees and Ziegler’s Grove to its left.

Location of the Wentz farm at Gettysburg