When was the Battle of Gettysburg fought?

The Battle of Gettysburg began on Wednesday, July 1st 1863. The first shots were fired northwest of town early in the morning as advancing Confederates ran into Union cavalry pickets, although exactly when and where has been a matter of intense debate.

It continued until Friday, July 3rd, with the repulse of Pickett’s Charge and Stuart’s attempt to drive around Meade’s flank and into his rear. Each of the three days saw intense fighting in and around the city.

The armies remained facing each other on the field on July 4th. There was minor skirmishing and some casualties but it did not escalate into major fighting, and it is not usually considered part of the battle. Lee’s army began its retreat to Virginia after dark on the 4th.

Where was the Battle of Gettysburg fought?

The Battle of Gettysburg took place around Gettysburg, Pennsylvania, a small crossroads town in southern Pennsylvania about 8 miles north of the Maryland border. It is the center hub of a network of roads feeding in from all angles of the compass. Gettysburg was also the end of a railroad line from Hanover, but it had been wrecked by Confederate troops. Gettysburg’s road network and its position on the east side of the mountains were important factors in why the battle was fought there. So was the terrain, which included good defensive ground such as Little Round Top, Culp’s Hill, and Cemetery Hill. 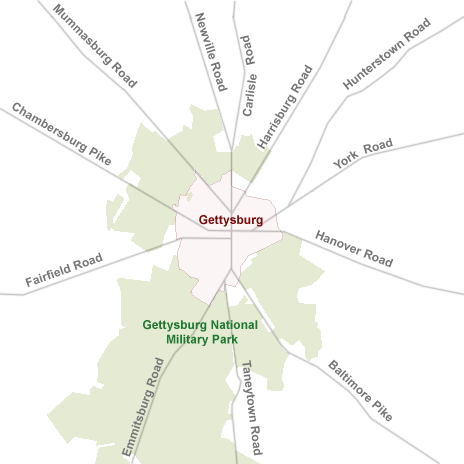 Gettysburg was the hub of a network of roads

The Roads to Gettysburg (listed clockwise)

How close is Gettysburg to places like Washington, Richmond and Philadelphia? 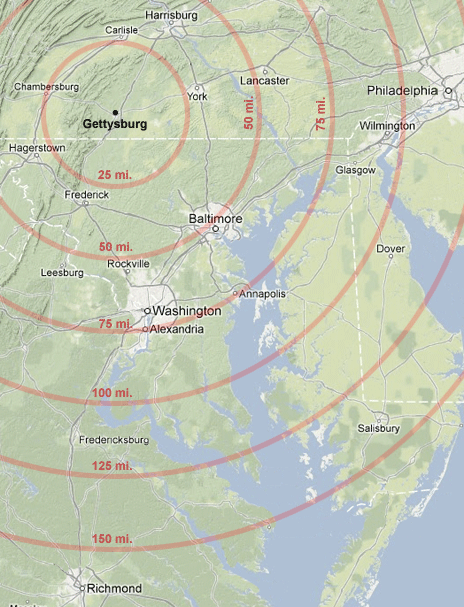 Who fought at Gettysburg?

What were the strengths of the armies that fought in the Battle of Gettysburg?

The Federal Army of the Potomac
93,700 men and 372 guns
Commanded by Major General George G. Meade

The armies at the Battle of Gettysburg included regiments and batteries from 12 Southern and 18 Northern states. Both armies had units from Maryland. See more details in the States at Gettysburg.

The Federal Army of the Potomac had an advantage in numbers of almost 24,000 men, helped by a last-minute transfer of over 10,000 men from the rear-area forces around Washington and Baltimore.

How many casualties were there in the Battle of Gettysburg?

Gettysburg was the bloodiest battle of the Civil War. It is estimated that there were at least 45,000 and possibly as many as 51,000 casualties in the two armies at Gettysburg.

How many people died at Gettysburg?

Note that the term “casualties” means not just people who were killed, but also includes men who were wounded (many of whom may have died of their wounds later), soldiers who were captured, and even men who ran away. It’s impossible to calculate an exact number because of missing or incomplete records. This estimate is one of the more conservative and probably significantly understates Confederate missing and wounded:

Were any civilians killed in the Battle of Gettysburg?

Hundreds of civilians sheltered in their homes as the fighting raged around them and one, John Burns, joined the fight and was wounded. But while a number of civilians died from the diseases the battle brought to town and several were killed by unexploded ordnance afterwards, only one civilian, Jennie Wade, was killed during the actual Battle of Gettysburg. She was struck by a stray shot while indoors in a house on the south side of town caring for a sick relative.

Who won the Battle of Gettysburg?

The Battle of Gettysburg was a decisive victory for the Union.

Tactically it may have seemed about even. Both armies lost about the same number of men. Lee kept his army on the field until the evening of the day after the battle, waiting for a counterattack by Meade which never came. But Meade’s larger army could better afford the losses – all eight of Lee’s infantry divisions lost about a third of their strength, while Meade’s largest Army Corps was virtually untouched. Lee was almost out of artillery ammunition, while Meade had enough for another battle. And Meade had no need to throw himself into a dangerous counterattack. Time was on his side as Union reinforcements moved to surround Lee, deep in enemy territory with no hope of reinforcement.

Both armies were badly hurt. The Union 1st and 3rd Corps never recovered from their casualties and were merged into other corps in March of 1864. Pickett’s Division was so damaged it was detached from Longstreet and sent to a quiet(er) sector along the Virginia-North Carolina border to recruit and recover. But the Union could more readily find fresh recruits, while Lee would increasingly struggle with a shortage of men, particularly of field and general officers.

Strategically there was no question. The Battle of Gettysburg stopped the Confederate invasion of the North and forced Lee to withdraw to Virginia. He was successful in his secondary goal of gathering supplies from untouched Northern regions, but his goal of moving the fighting out of war-ravaged Virginia only lasted for a few weeks. By August the armies had returned to their starting places along the Rappahannock River. Lee’s primary goal of exploiting a Confederate victory by pursuing and destroying a beaten Union army would remain an elusive dream.

Did the Battle of Gettysburg end the Civil War?

What was the importance of the Battle of Gettysburg?

At the start of the Gettysburg Campaign both armies were separated by the Rappahannock River in Virginia. The North had attacked across the river twice, in the Battle of Fredericksburg (December 1862) and the Battle of Chancellorsville (May 1863). Both were Confederate victories, although both times the North was able to withdraw back across the river and safely rebuild.

Lee knew he could not just sit south of the river and throw back Northern attacks. His army could not replace its casualties while the North could, meaning he would grow ever weaker in comparison. Remaining in one location had stripped the nearby area of food, forage and firewood, and the Southern rail system could not supply his army properly. Already he had been forced to disperse his hungry artillery horses away from the army to keep them alive, limiting his mobility in an emergency. And Lee knew that some day the North might find the winning combination.

Lee’s plan was to take the war to the north in a move up the Shenandoah Valley. This would let the farmers there harvest their crops for the Confederacy, while Lee’s army could forage in the rich and untouched lands of Pennsylvania. It would threaten Union cities such as Baltimore, Harrisburg and Philadelphia. And it would give Lee a chance to fight and win a battle in the open, where he could finally pursue and possibly destroy the beaten enemy. Lee saw it as the best way to end the war before the South was trapped in an unwinnable battle of attrition.

Lee maintained the initiative all through the battle, launching major attacks each day. But by the evening on July 3rd he had reached the end of his strength. His army had lost heavy casualties and he was critically low on ammunition, particularly artillery. He was well into Union territory where reinforcements would not be available, while Meade’s force was rapidly growing. He pulled back into a strong defensive line on the 4th, hoping Meade would attack and spend himself the way Lee had for three days, but Meade refused to rise to the bait. Lee’s only choice was to return to Virginia.

The Battle of Gettysburg is considered a turning point. Although it did not involve the largest number of troops the battle had the highest casualties of any battle of the Civil War. Up until then Lee might have been able to win the war with a stunning victory that forced the North to concede defeat. Afterwards the best he could hope for was to make the North’s victory so costly they would give up in exhaustion. Lee’s heavy losses in men and particularly officers would be a problem for the rest of the war. And for the rest of the war Lee was on the strategic defensive, forced into the war of attrition he feared, and eventually cornered in an unwinnable siege around Richmond.

See more facts, some quite unusual, about the greatest battle of the Civil War.