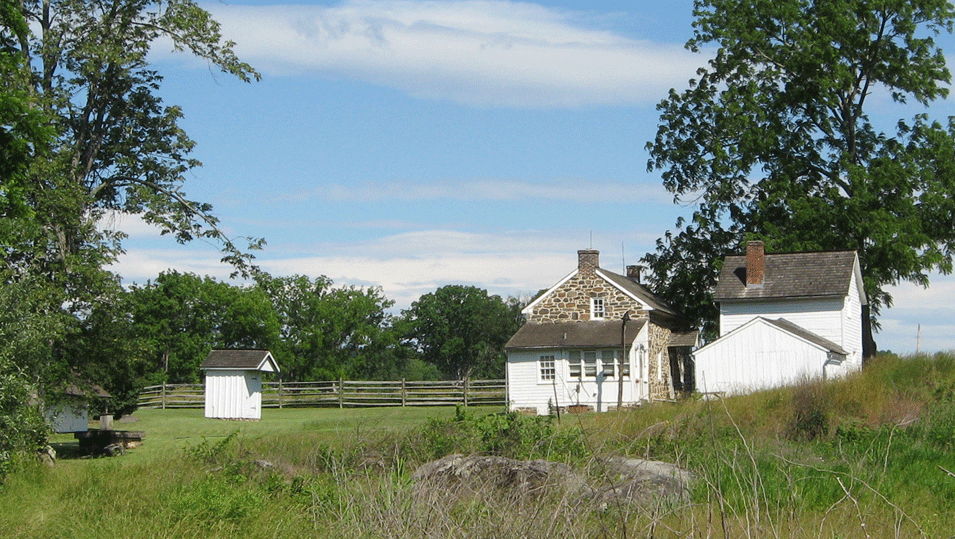 The John Slyder farm was on the western side of Big Round Top, just down Plum Run from the Devil’s Den.

John had moved from Maryland and bought the 75 acre farm in 1849. By the 1860’s it included a two story stone house, barn, blacksmith and carpenter shops, an orchard of peach and pear trees, thirty acres of timber and eighteen acres of meadow.

On July 2nd Confederate General John B. Hood’s Division swept across Slyder’s farm in its advance toward the Devil’s Den and Little Round Top. The crops and orchards were trampled and destroyed and the farm buildings became a Confederate field hospital, with the family’s possessions looted or spoiled.

Two months after the battle, in September, John sold the farm and moved to Ohio.

The Slyder family had connections with other Gettysburg families. John’s wife Catherine was the sister of Lydia Leister, whose house became General Meade’s headquarters during the battle. And in October of 1863 John’s son William married Josephine Miller, the granddaughter of Peter and Susan Rogers, whose farm lay on Emmitsburg Road.

The farm passed to the Snyder family, who owned it around the turn of the century. It is now owned by the National Park Service. The monument to Companies E & H, Second United States Sharpshooters (Vermont Sharpshooters) is beside the driveway in front of the farmhouse.

Location of the farm