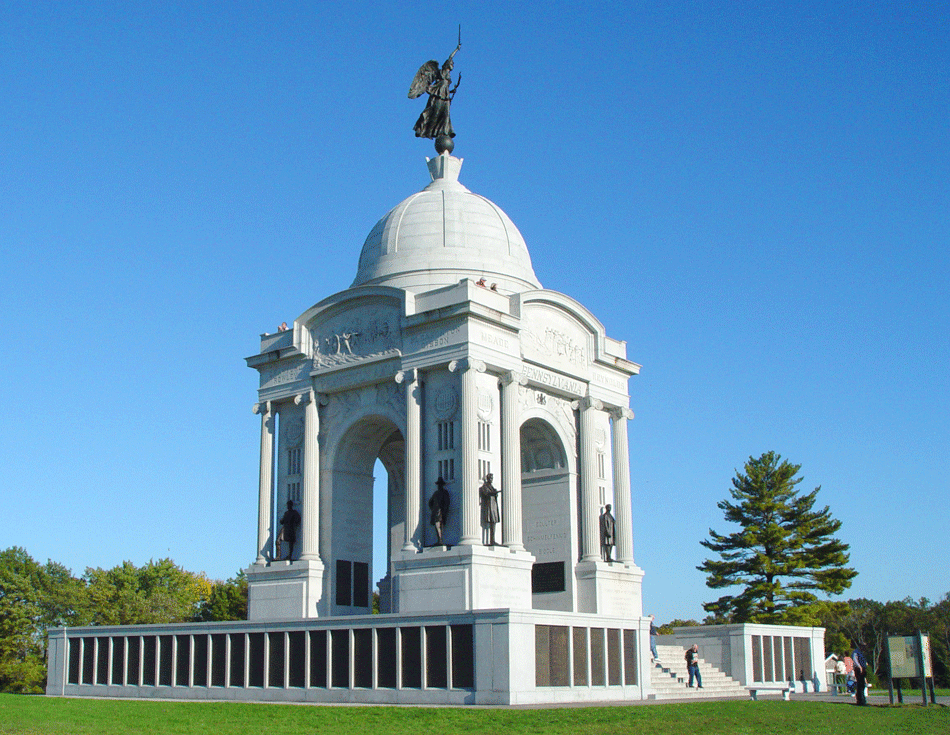 State of Pennsylvania Monument at Gettysburg

About the State of Pennsylvania Monument

The State of Pennsylvania Monument is the largest monument on the Gettysburg battlefield. The tip of the sword of the statue of Winged Victory is 110 feet high. A spiral staircase takes visitors to the roof of the monument, which offers a panoramic view of the battlefield.

The monument is made from North Carolina granite set over an iron and concrete frame. Rising over all Sculptor Samuel Murray created a 7,500 pound statue of Winged Victory from melted down Civil War cannons which stands on top of the dome. He also created the reliefs over each of the arches.

Inscriptions from the tablets around the entrances

From the inscriptions flanking the front entrance:

The Commonwealth of Pennsylvania
In honor of her sons who on this field fought for the Preservation of the Union July 1.2. & 3. 1863

From the tablet inside the entrance:

Memorial to the soldiers of Pennsylvania who fought
at Gettysburg July, 1863, erected under authority
of acts of the General Assembly of Pennsylvania
approved June 13, 1907, and February 11, 1909, by
Edwin S. Stuart
Governor of the Commonwealth

The commissioners charged with the selection of the design for the memorial and the construction of it, and who undertook the collection of the names and figures and other data theron, which, necessarily, are approximate, were
St. Clair A. Mulholland – Henry S. Huidekoper – John P. Taylor, Charles F. McKenna – Edward L. Whittelsey, George P. Morgan – Charles E. Quail – Edward A. Irvin, Henry H. Cumings – Jacob C. Stineman

From the tablet on the inside right entryway:

To the Loyal Women who through four years of war, endured suffering and bereavement.This tablet is dedicated
in grateful recognition of their patriotism by the men of Pennsylvania
who served in the Army and Navy of the United
States during the War of the Rebellion.

From the inscription on the inside right entryway:

There were required in the construction of the Pennsylvania Memorial:
1252 tons of cut granite
740 tons of sand
366 tons of cement
1240 tons of broken stone
50 tons of steel
22 tons of bronze
Total 3840 tons

From the tablet at the stairway:

The base and the interior of the monument are lined with bronze tablets of the Pennsylvania regiments and batteries who fought in the Battle of Gettysburg. Each tablet lists the roster by company of the officers and men of that unit. The monument has the names of over 34,000 Pennsylvanians who participated in the battle.

Each of the stone arches leading into the interior of the monument is flanked by a pair of larger than life bronze statues and topped with a relief representing infantry, cavalry, artillery, and signals. The group of bronze statues is made up of President Lincoln, Pennsylvania’s Governor Curtin, and the six highest ranking Pennsylvania generals in the Battle of Gettysburg.

West side of the monument

Pennsylvania Governor Andrew Curtin and President Lincoln flank the entryway on the west side of the monument:

North side of the monument 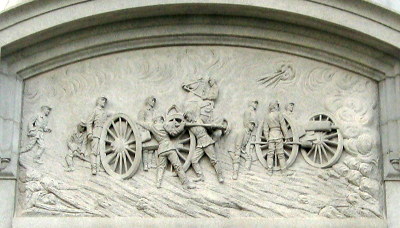 South side of the monument

East side of the monument 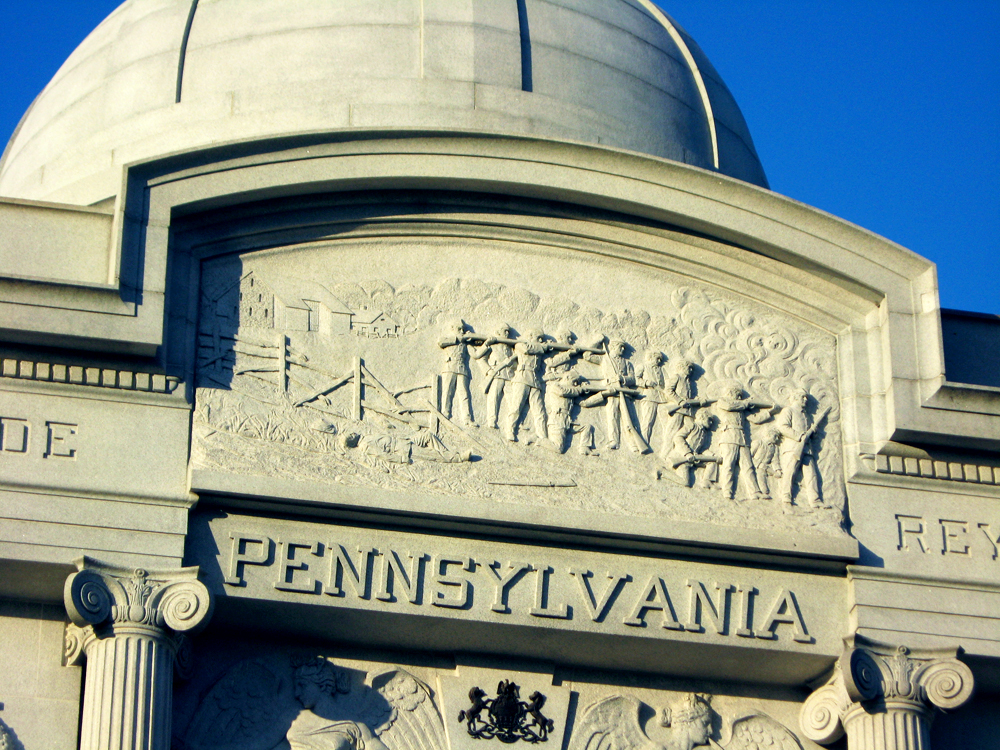 Location of the State of Pennsylvania monument at Gettysburg

The State of Pennsylvania Monument is south of Gettysburg on Hancock Avenue at Pleasonton Avenue. Hancock Avenue is one way northbound. (39°48’27.6″N 77°14’06.6″W)