The Black Horse Tavern is about two and a half miles southwest of Gettysburg on Fairfield Road. The stone tavern was built in 1812. At the time of the Battle of Gettysburg it was owned by 57 year old Francis Bream. He was the wealthiest landowner in Adams County, whose combined properties were worth $32,000. Bream lived in the building with his wife Elizabeth and eight other family members. It is a private residence today.

On July 1st, The Confederate division of Lafayette McLaws camped in the vicinity before moving up for their assault on July 2. During the battle it was a prominent landmark, field hospital and staging area behind the Confederate lines and on Lee’s line of retreat.

From the War Department marker in front of the tavern

At the time of the battle of Gettysburg
this was the name of the tavern kept
in this stone house which was built
in 1813 and in a large log house
of much older date then adjoining. 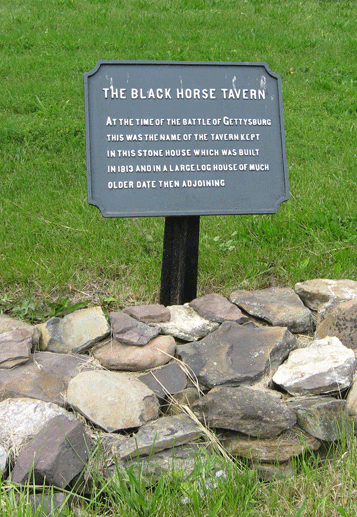 Marker in front of the tavern southwest of Gettysburg

Location of the tavern at Gettysburg