July 2. The Division was placed in position facing the Union line on the Emmitsburg Road. About 4 P. M. the batteries opened on the position the Division pressing to the front and the Union troops retiring to the hill in rear. The battle continued until nearly night when a strong Union force met the supporting Division which was cooperating on the left and drove one brigade back and checked the support of the other brigade exposing the left. It was thought prudent not to push further until other troops of the Corps came up. The Division was withdrawn to the first position of Union troops resting at the Peach Orchard the conflict to be renewed in the morning when other orders were received.

July 3. With the exception of severe skirmishing the Division was not engaged and after night disposition were made to withdraw.

July 4. The Division took up the line of march during the night.

The division was commanded at the Battle of Gettysburg by Major General Lafayette McLaws. McLaws was a career army officer from Augusta, Georgia, where he was friends with James Longstreet. He attended West Point with Longstreet (West Point Class of 1842) and fought in the Mexican War. He married the daughter of Zachary Taylor, which made him a cousin of Jefferson Davis.

McLaws resigned from the U.S. Army at the start of the Civil War and became colonel of the 10th Georgia Infantry Regiment. He was promoted to brigadier general in September of 1861. In March of 1862 his brigade was assigned to Magruder’s Division on the Virginia Peninsula. In April McLaws was given command of a division and promoted to major general shortly after.

McLaws’s Division missed Second Manassas while it was held back to cover Richmond, but rejoined Lee’s Army immediately after and took part in the capture of Harper’s Ferry. They fought in the West Woods at Antietam and at Marye’s Heights at Fredericksburg under Longstreet. When Longstreet was detached for the Suffolk Expedition in 1863 McLaws remained with Lee under his direct command at Chancellorsville.

McLaws accompanied Longstreet when he was transferred to the western theater. During the political infighting of the Knoxville campaign Longstreet relieved McLaws. He never returned to the Army of Northern Virginia. 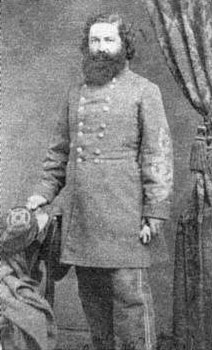 The monument to McLaws’s Division is southwest of Gettysburg on the west side of West Confederate Avenue. It is at the south end of the parking area for the observation tower. (39°47’57.6″N 77°15’22.1″W)

From the marker by Black Horse Tavern

July 1 McLaws’s Division arrived late in the day and camped in this vicinity.

July 2 In the morning McLaws’s Division moved on the road towards Gettysburg but turning to the right half mile this side of Willoughby Run and crossing that stream lower down formed line as marked on the Battlefield. Pickett’s Division marched by this place in the afternoon but followed the other road with some deflections to avoid being seen by the Union Signal Corps and crossing Willoughby Run lay that night in the west side of Spangler’s Woods.

Location of the position marker at Black Horse Tavern