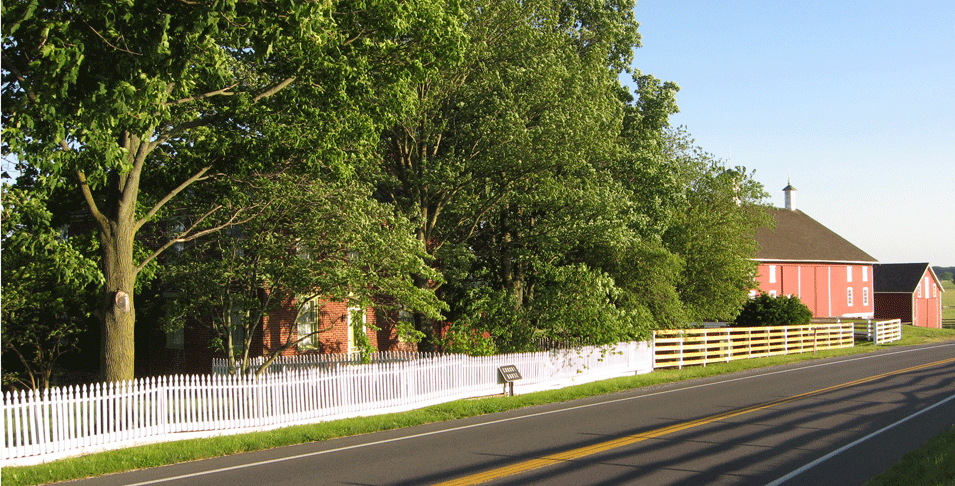 View of the Codori Farm buildings from the north

The Codori Farm is just south of Gettysburg on the east side of Emmitsburg Road. (Emmitsburg Rd. – Codori Farm tour map) It was the scene of heavy fighting on July 2nd and was at the center of Pickett’s Charge on July 3rd. General Pickett remained near the farm buildings during the attack. The current farmhouse was there at the time of the battle, although a two story brick addition was added to its rear in 1877. The current barn is a replacement for the original that was torn down in 1882.

Nicholas Codori owned the farm during the battle. He came to America from Alsace, France, in 1828 at the age of 19. He bought the 273 acre farm in 1854, replacing the original log house with today’s two story frame building. Nicholas was a butcher and lived in town at 44 York Street. This is now the The Brafferton Inn Bed and Breakfast. He rented the farm to tenants. Nicholas was one of the original parishioners of St. Francis Xavier Church, and offered his home on York Street for Mass while the church served as a hospital from the time of the battle until January of 1864.

Nicholas died in July of 1878 after a horrific accident. He lost his foot and suffered several other serious cuts from a mowing machine. An article from the Gettysburg Times tells how as he was being driven into town to the doctor he remained seated, “saluting with his usual pleasant greeting acquaintances met on the way.”

Who lived on the farm?

It is estimated that over 500 Confederate soldiers were buried on the farm after the battle. The Codori farm today is owned by the National Park Service and the farmhouse is a residence for park personnel.

The Codori barn and outbuilding from the south