The division was commanded at the Battle of Gettysburg by Major General George E. Pickett (USMA ’46). Pickett was a career army officer who had made a name for himself standing up to the British in Puget Sound.

Pickett had the smallest Confederate infantry division at Gettysburg with only three brigades, all Virginians. Two other brigades from the division had been detatched to defend the Richmond area before the march north. (It was still larger than any Federal division – see a comparison) It was also the last to reach the battlefield, arriving early on July 3rd.

Relatively fresh and untouched by casualties, Pickett’s Division was the obvious choice to take part in the final attack Lee needed to break through Union lines. But although it has come down through history as “Pickett’s Charge,” Pickett’s was only one of three divisions which participated and Pickett was not the overall commander.

Pickett’s Division crossed the mile of open ground under intense artillery and eventually rifle fire. It reached the Union defensive line at The Angle and for a short time punched through. But it had no support and was quickly overwhelmed.

The division suffered crippling casualties, particularly among the officers and NCOs. All three brigade and twelve of thirteen regimental commanders were killed or wounded. Pickett himself was unscathed, for which he was criticised.

After the battle Lee assigned the shattered division to guard Federal prisoners on the retreat back to Virginia, which Pickett considered an insult. When its fellow divisions in the First Corps were sent to the Western Theater, Pickett’s Division was detatched to the Richmond area to refit and recruit.

July 2. On march to Gettysburg.

July 3. Reached the field about 9 A. M. Near 12 M. took position beyond crest of hill on which the artillery was placed. About 1.30 P. M. Division was formed in an open field east of Spangler’s Woods the right near a barn facing the Union line on Cemetery Ridge. At 3 P. M. moved forward to assault across the field about three fourths of a mile under severe fire losing many officers and men only a few reaching the salient. The Division being separated from its support on the right and left and the assault having failed returned to its former position on the ridge.

July 4. The Division took up the line of march during the night. 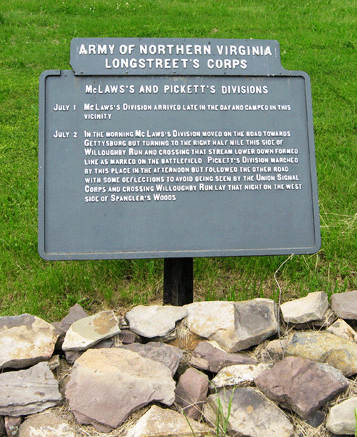 From the marker by Black Horse Tavern:

July 1 McLaws’s Division arrived late in the day and camped in this vicinity.

July 2 In the morning McLaws’s Division moved on the road towards Gettysburg but turning to the right half mile this side of Willoughby Run and crossing that stream lower down formed line as marked on the Battlefield. Pickett’s Division marched by this place in the afternoon but followed the other road with some deflections to avoid being seen by the Union Signal Corps and crossing Willoughby Run lay that night in the west side of Spangler’s Woods.