The battalion was commanded by Major James Dearing. a Virginian who resigned from West Point just before he would have graduated in 1861 due to Virginia’s secession. 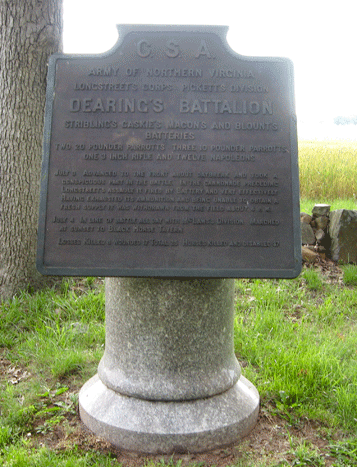 July 3. Advanced to the front about daybreak and took a conspicuous part in the battle. In the cannonade preceding Longstreet’s assault it fired by battery and very effectively. Having exhausted its ammunition and being unable to obtain a fresh supply it was withdrawn from the field about 4 P. M.

July 4. In line of battle all day with McLaws’ Division. Marched at sunset to Black Horse Tavern.