There are two monuments to the 1st Brigade, 2nd Division, 12th Corps of the Army of the Potomac. A monument in the traditional style shows the brigade’s location on Culp’s Hill. (North Culp’s Hill tour map) A second monument in a unique style shows the brigade’s first position on July 1 south of Gettysburg on Sedgwick Avenue. (Sedgwick Avenue tour map)

Colonel Charles Candy commanded the brigade at Gettysburg. Candy was a career soldier, serving as enlisted man in both the 1st Dragoons and the 1st Infantry before the war. He advanced from private to sergeant major by 1860. After the war started he was appointed a volunteer captain on the staff of General Stone. He became colonel of the 66th Ohio Infantry Regiment in December of 1861. Colonel Candy took command of the brigade as senior colonel when General Geary was wounded at Cedar Mountain .

From the monument on Culp’s Hill

Army of the Potomac

July 1. Arrived at 5 P. M. and took position on the left of Third Brigade between the First Corps and the Round Tops. The 5th Ohio and 147th Penna. occupied Little Round Top during the night as skirmishers.

July 2. Moved to Culp’s Hill in the morning and took position as a reserve in rear of Third Brigade. At 7 P. M. moved to the rear on Baltimore Pike across Rock Creek. Returned at midnight and formed on the right of Third Brigade perpendicular to its line.

July 3. At daylight the artillery opened on the Confederate line. The 147th Penna. advanced and captured a stone wall. The 5th Ohio held its position on the right of the Brigade under a heavy fire. The other regiments were in reserve and at intervals relieved the regiments of Second and Third Brigades. The 66th Ohio advanced beyond the breastworks and poured an enfilading fire on the Confederates occupying the works on the right. At 10.30 A. M. Major Gen. Johnson’s forces were forced from the works. Skirmishing continued all day.

Location of the monument on Culp’s Hill 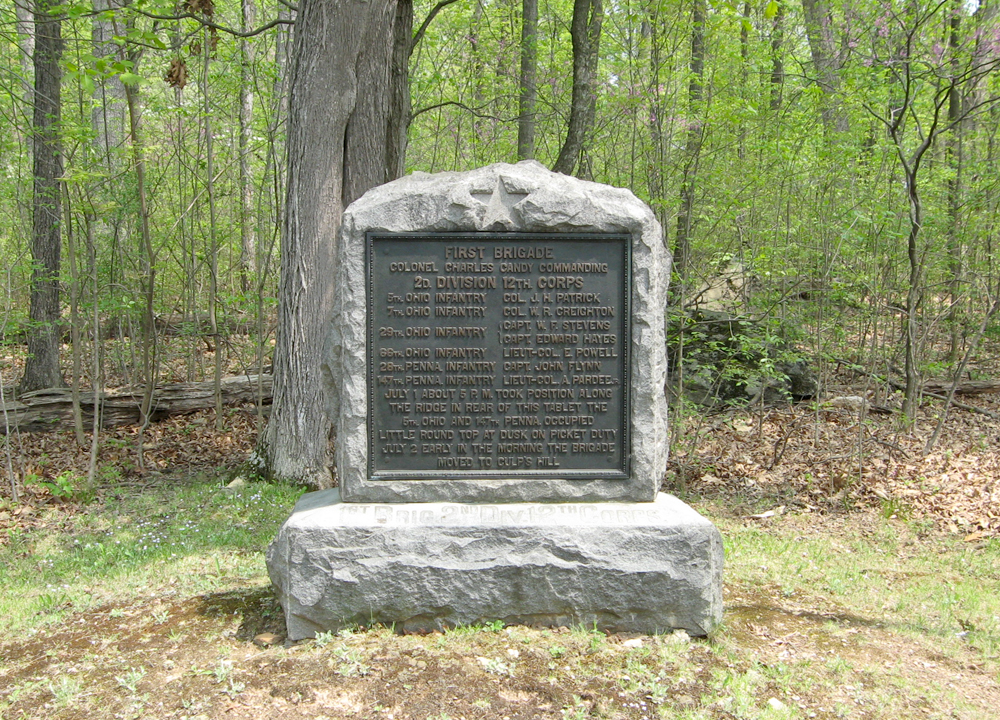 Monument to the 1st Brigade, 2nd Division, 12th Corps of the Army of the Potomac at Gettysburg

July 1 about 5 p.m. took position along the ridge in rear of this tablet. The 5th Ohio and 147th Penna. occupied Little Round Top at dusk on picket duty. July 2 early in the morning the brigade moved to Culp’s Hill.

Location of the marker on Sedgwick Avenue