The monument to the 147th Pennsylvania Volunteer Infantry Regiment is southeast of Gettysburg on the south side of Culp’s Hill. Two unique star-shaped markers show the regiment’s flanks. (South Culp’s Hill tour map) A tablet on a nearby large boulder in the middle of Pardee Field shows where the regiment attacked on the morning of July 3rd.

A star-shaped marker at the northern edge of Little Round Top at the corner of Sykes Avenue and Wheatfield Road (Little Round Top tour map) shows the regiment’s location on the evening of July 1st.

The 147th Pennsylvania was commanded at the Battle of Gettysburg by Lieutenant Colonel Ario Pardee. It brought eight companies to the field. Companies I and K had not been organized at the time of the battle.

The monument is a five pointed star,  the symbol of the Union Twelfth Army Corps, which led General Geary’s 2nd Division to be known as the “White Star Division.” The monument was dedicated by the State of Pennsylvania in 1885.

Mustered in Oct. 28th 1862.
Reenlisted Dec. 29th 1863. Mustered out July 15th 1865
On the night of July 1st this regiment lay on the northern slope
of Little Round Top holding the extreme left of the
Union army. At 6 am July 2d moved to Culp’s Hill, where
it was held in reserve until evening, then marched
toward the left with the Brigade
returning at about 3 a.m. July 3rd and
occupied this position.

Immediately behind and to the left of the main monument is a marker to Company G:

Location of the main monument to the 147th Pennsylvania at Gettysburg

The main monument to the 147th Pennsylvania Infantry is south of Gettysburg on the west side of Geary Avenue about 150 yards southwest of its intersection with Slocum Avenue. Geary and Slocum Avenues are one way northbound. (39°48’57.0″N 77°13’13.4″W)

From the tablet on the Pardee Field boulder:

At 5 a.m. the one hundred and forty-
seventh Penna. Volunteers (Lt. Col. Ario Pardee Jr.)
was ordered to charge and carry the stone
wall occupied by the enemy. This they did in
handsome style, their firing causing heavy
loss to the enemy who then abandoned
the entire line of the stone wall.
Report of Brig. General John W. Geary,
commanding 2d Division 12th Corps.

Location of the Pardee Field boulder

The marker to the 147th Pennsylvania on the Pardee Field Boulder is south of Gettysburg on the east side of Geary Avenue about 120 yards southwest of its intersection with Slocum Avenue and about 65 yards southeast of the main monument to the 147th. Geary and Slocum Avenues are one way northbound. (39°48’56.6″N 77°13’10.6″W)

Position marker at Little Round Top

From the front of the marker on Little Round Top, which shows the regiment’s position shortly after it arrived on the field late on July 1: 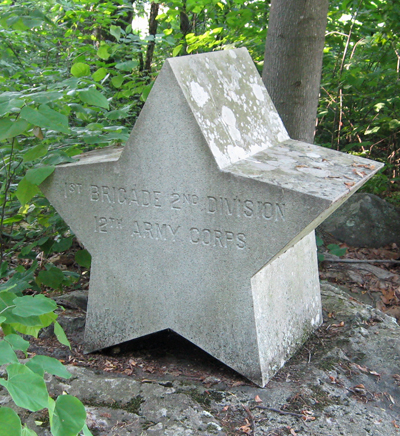 Rear view of the marker on Little Round Top

From the rear of the marker:

The July 1 position marker for the 147th Pennsylvania is on the north side of Little Round Top on the southwest corner of Sykes Avenue and Wheatfield Road. Sykes Avenue is one way northbound. (39°47’40.4″N 77°14’03.7″W)

Right flank marker for the 147th Pennsylvania at Pardee Field