The monument to the 3rd Brigade, 2nd Division, 3rd Corps is south of Gettysburg on Sickles Avenue. (DeTrobiand Avenue – The Wheatfield tour map) 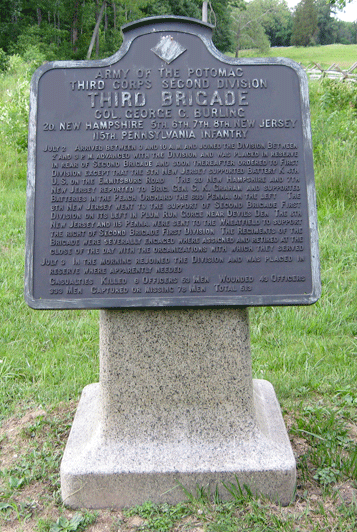 July 2. Arrived between 9 and 10 A. M. and joined the Division. Between 2 and 3 P. M. advanced with the Division and was placed in reserve in rear of Second Brigade and soon thereafter ordered to First Division except that the 5th New Jersey supported Battery K 4th U. S. on the Emmitsburg Road. The 2d New Hampshire and 7th New Jersey reported to Brig. Gen. C. K. Graham and supported batteries in the Peach Orchard the 63d Penna. on the left. The 6th New Jersey went to the support of the Second Brigade First Division on its left in Plum Run Gorge near Devil’s Den. The 8th New Jersey and 115 Penna. were sent to the Wheatfield to support the right of Second Brigade First Division. The regiments of the Brigade were severely engaged where assigned and retired at the close of the day with the organizations with which they served.

July 3. In the morning rejoined the Division and was placed in reserve where apparently needed.

Colonel George C. Burling commanded the brigade at the battle of Gettysburg. Burling was a coal merchant and militia officer from Burlington County, New Jersey. Burling’s militia company became Company F of the 6th New jersey Infantry Regiment. He was promoted to major in March of 1862 and lieutenant colonel in May of 1862. He was wounded at Second Bull Run in August. Burling was promoted to colonel in September of 1862 when Gershom Mott became brigadier general. Burling was wounded again at Chancellorsville, but returned to command the brigade after the wounding of General Mott. He resigned in March of 1864 due to poor health.

Location of the marker

The marker is south of Gettysburg in the Wheatfield. It is on the north side of de Trobriand Avenue. It is about 600 feet (by road) south of Sickles Avenue.