A Headquarters Marker is across from the Trostle farm on United States Avenue.

July 1. This Corps was at Emmitsburg. Complying with General Howard’s urgent request received at 3:10 P. M. General Sickles marched his Corps except two brigades and two batteries to Gettysburg.

July 2. At daybreak these troops rejoined the Corps massed on the left of Cemetery Ridge. During the forenoon the Confederates advanced towards the Union left. A reconnaissance disclosed their formation in three columns. Buford’s Cavalry on the left flank had been withdrawn. About 2 P. M. this Corps, then the extreme left of the Union line, changed front to check the enemy until the 5th Corps could march from the Union right and occupy the Round Tops. The 3rd Corps, about 9800 men, formed line of battle from Plum Run to the Peach Orchard, thence along the Emmitsburg road 300 yards past the Roger House. Birney’s Division on left and Humphreys’ Division along Emmitsburg road against three divisions, about 17000 strong under Longstreet. The Confederate batteries opened about 3 o’clock. The Infantry advancing soon after against the 3rd Corps left. Following an oblique order of battle, at 5:30 P. M. the enemy attacked the 3rd Corps left centre. Reinforcements repulsed this attack and occupied the Round Tops, relieving Birney’s Division except at the Peach Orchard. About 6:30 P. M. the 3rd Corps centre at the Peach Orchard was broken after a stubborn resistance uncovering the left of Humphreys’ Division which changed front and slowly retired following Birney to Cemetery Ridge and again advancing to Emmitsburg Road. Held that line until morning, the battle continuing until 7:30 P. M. General Sickles was severely wounded about 6 o’clock, General Birney taking command.

July 3. In support of the left centre on Cemetery Ridge. 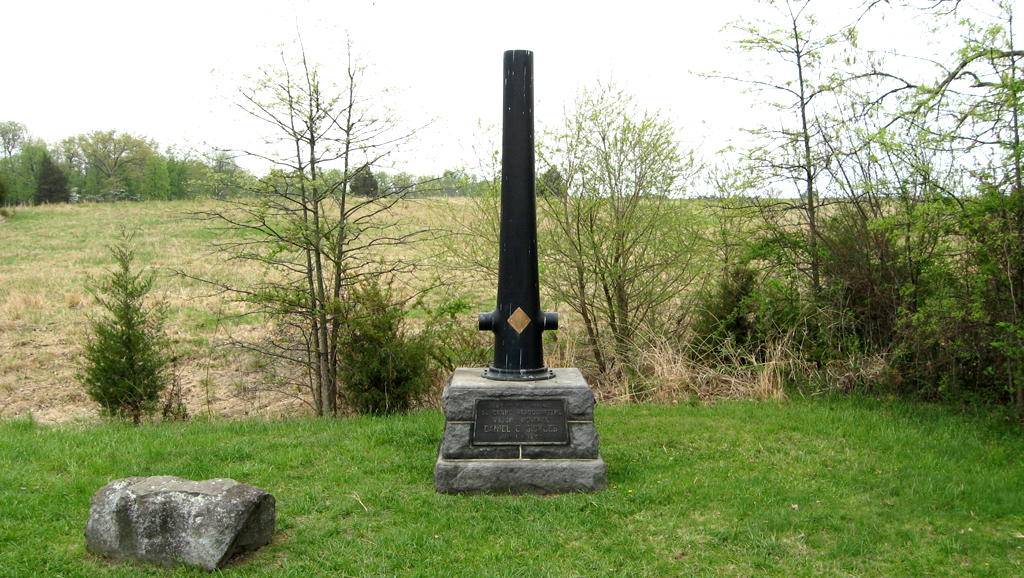 From the Headquarters Marker across from the Trostle Farm:

The set of four Third Corps monuments on the northwest corner of the Peach Orchard.