The monument to the 1st Division, 3rd Corps of the Army of the Potomac is south of Gettysburg in the Peach Orchard (Peach Orchard tour map). 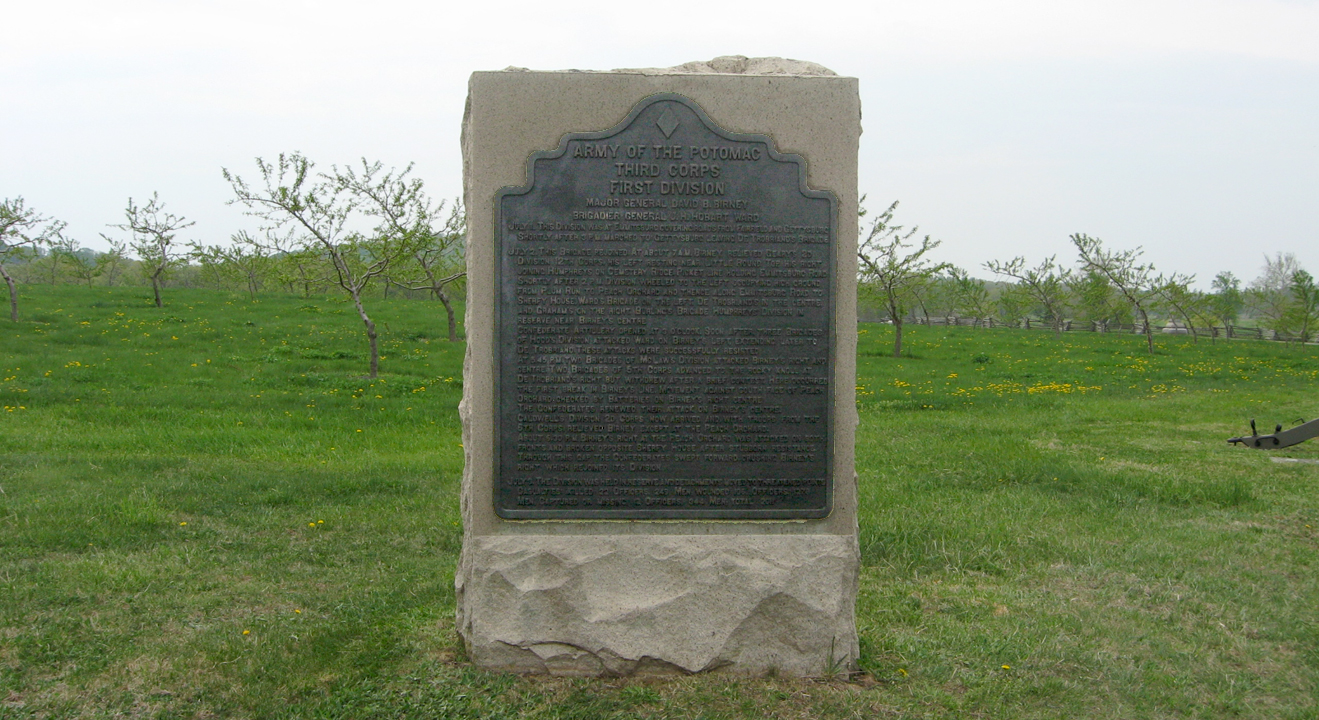 Monument to the 1st Division of the 3rd Corps at Gettysburg

Major General David B. Birney commanded the division at the Battle of Gettysburg. He was a Philadelphia attorney and the son of an abolitionist newspaper editor. Birney took command of the remnants of the Third Corps after Sickles was wounded in spite of receiving two minor wounds himself. Brigadier General J. H. Hobart Ward of the division’s Second Brigade then took over command of the division.

July 1. This Division was at Emmitsburg covering roads from Fairfield and Gettysburg. Shortly after 3 p.m. marched to Gettysburg leaving De Trobriand’s Brigade.

July 2. This Brigade rejoined. At about 7 a.m. Birney relieved Geary’s 2d Division 12th Corps, his left resting near Little Round Top, his right joining Humphreys on Cemetery Ridge. Picket line holding Emmitsburg road. Shortly after 2 p.m. Division wheeled to the left occupying high ground from Plum Run to Peach Orchard and thence along Emmitsburg Road to the Sherfy House, Ward’s Brigade on the left, De Trobriand’s in the centre, and Graham’s on the right. Burling’s Brigade Humphreys’ Division in reserve near Birney’s centre.

At 5:30 p.m. two brigades of McLaw’s [sic] Division attacked Birney’s right and centre. Two brigades of 5th Corps advanced to the rocky knoll at De Trobriand’s right but withdrew after a brief contest. Here occurred the first break in Birney’s line. Movement against south face of the Peach Orchard checked by batteries in Birney’s right centre.

The Confederates renewed their attack on Birney’s centre.

July 3. The Division was held in reserve and detachments moved to threatened points.

The monument is south of Gettysburg at the Peach Orchard. It is on the southeast corner of Emmitsburg Road and Wheatfield Road. It is the monument closest to Emmitsburg Road of the four Third Corps monuments there. (39°48’05.2″N 77°15’00.2″W)