The monument at Gettysburg to Major General Daniel Sickles is south of Gettysburg off United States Avenue northwest of the Trostle Farm buildings. (39.802544° N, 77.242773° W; Google map) It was dedicated in 1901.

Sickles was the highest ranking officer in the Union Army at the Battle of Gettysburg who had not attended West Point.

Looking north in the Trostle farmyard. In the distance the State of Pennsylvania monument just peeks over the right side of the 3rd Corps diamond on Sickles’ monument 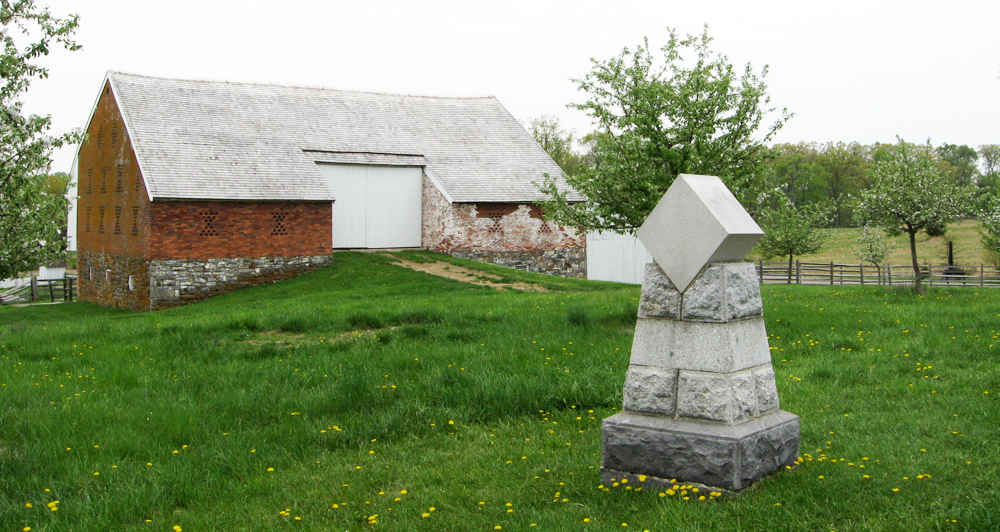 Daniel Sickles is one of the great controversial figures of U.S. history. He was born on October 20, 1819 in New York City. After attending New York University and studying law he went into politics, becoming a part of the powerful Democratic Tammany Hall machine. He served in a variety of posts, including City Corporate Counsel, Secretary of Legation in London, New York State Senator and U.S. Congressman from 1857 to 1861.

It was during this last position that he became a national figure for shooting and killing his wife’s lover. That it was the son of Star Spangled Banner author Francis Scott Key and done in the street in front of the White House only added to the notoriety. Sickles was acquitted in the first use of the “temporary Insanity” defense but enraged the public and society by forgiving his young wife.

The coming of the war gave Sickles the opportunity to rejuvenate his reputation, and he quickly raised an entire brigade of men for the Union cause, which became the Excelsior Brigade. He soon became its commander, and although he was often often in conflict with his commanders he proved himself a good soldier who was totally fearless in combat. He was given command of a division in time for Fredericksburg and became 3rd Corps commander before Chancellorsville.

At Gettysburg he advanced his command on July 2nd from its assigned position on the flank of the Union army just before Longstreet’s Assault. The controversy over this move would be bitterly debated in the halls of Congress and continues to this day. In intense fighting that resulted he was struck by an artillery shell that nearly severed his leg. As he was carried from the field he had himself propped up on a stretcher and industriously puffed a cigar to show his men that he was still alive.

Sickles never returned to field command, being sent on a variety of administrative and diplomatic missions. After the war he served as military governor of South Carolina, as minister to Spain, was elected to a term in Congress which saw him work single-mindedly for the establishment of a memorial park at Gettysburg, and was Chairman of the New York State Monuments Commission, from which he was removed in 1912 for financial improprieties that were probably due mostly to poor management.

He is one of two Union Corps commanders not represented at Gettysburg by a statue; a story is that there was one planned for him but Sickles himself “reappropriated” the funds. When asked once where his monument was, he replied, “the whole park is my monument!”

Daniel Sickles died in 1914 in New York and is buried in Arlington National Cemetery.