Major General Oliver O. Howard commanded the Eleventh Army Corps at the Battle of Gettysburg. For a large part of the day on July 1st after General Reynolds was killed and until the arrival of General Hancock he was the senior Union officer on the battlefield.

The monument to General Howard is southeast of Gettysburg on Cemetery Hill, where he had established a fallback position that allowed the Union forces to rally after their defeat on July 1st. (39.821948° N, 77.228877° W; Google map; Tour map: East Cemetery Hill ) 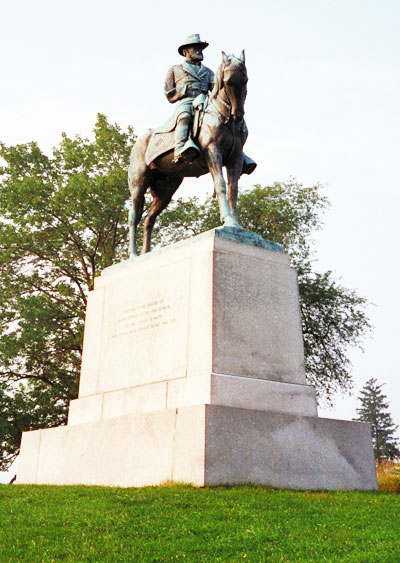 Fromt the left side:

Erected to the memory of Major General Oliver Otis Howard and the citizens of Maine who served their country in the Civil War.

Oliver O. Howard was born on November 8, 1830 in Leeds, Maine. After graduating from Bowdoin College he attended West Point, graduating in the Class of 1854. He spent several years there as a professor of mathematics, and with the outbreak of the war became Colonel of the 3rd Maine Infantry.

He commanded a brigade at Bull Run and again in the Peninsula Campaign, where he lost his arm at Seven Pines. He quickly returned to duty, taking over the wounded Sedgwick’s division at Antietam and the 11th Corps in November of 1862.

The collapse and rout of the 11th Corps at Chancellorsville was directly attributable to Howard’s neglect of his flank, but he retained his command.

At Gettysburg he found himself in command of the field with the death of Reynolds on July 1. Howard’s command again collapsed and was routed, again due in large part to his mishandling. He did have the foresite to leave a brigade on Cemetery Hill that was able to form the nucleus of a defensive line, assisted by the arrival of Major General Winfield Hancock.

Hancock had been sent by Meade to take command of the field when Meade heard of the death of Reynolds. This led to a confrontation with Howard, who was senior to Hancock and refused to subject himself to Hancock’s orders. Hancock worked out a compromise to salvage Howard’s feelings, but it is perhaps fitting that on Cemetery Hill Howard’s statue has its back conspicuously turned towards Hancock’s statue a short distance away.

Oddly, Howard was one of three men (the other two being army commanders Hooker and Meade) who were voted the thanks of congress for their actions at Gettysburg.

After Gettysburg Howard’s 11th Corps was ordered west to to Chattanooga. In 1864 he commanded the 4th Corps in the Atlanta campaign and took over the Army of Tennessee after the death of General McPherson. Howard led the army on Sherman’s march to the sea and in the Carolinas campaign.

After the war Howard, who was a deeply religious abolitionist, dedicated himself to the welfare of the freed slaves. He was the first commissioner of the Freedman’s Bureau and was instrumental in establishing Howard University. He served on the western frontier in the 1870’s and 80’s and then was Superintendent of West Point. In 1886 he commanded the Division of the East. In 1893 he was awarded the Medal of Honor for his actions at Seven Pines.

After his retirement from the army in 1894 he helped establish Lincoln Memorial University in Tennessee. He died in Burlington, Vermont in 1909.