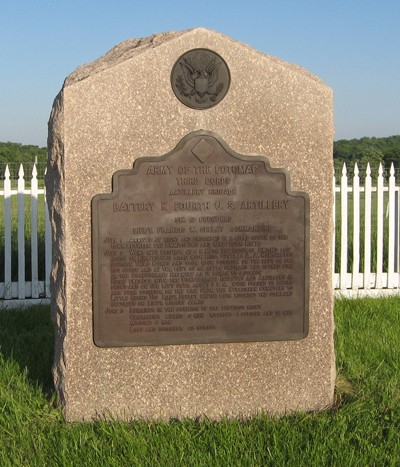 July 1 Arrived at night and encamped in a field south of the town between the Emmitsburg and Taneytown Roads.

July 2 Went into position at 4 p.m. on the right of Smith’s log house on Emmitsburg Road with Brig. General A.A. Humphreys’s Division Third Corps and soon took position on the left of the log house and at the left of an apple orchard and opened fire on the Confederate infantry as it began to advance.

Hotly engaged with the Confederate infantry and artillery in front on the line from the Evergreen Cemetery to Little Round Top. Lieut. Seeley having been wounded the command devolved on Lieut. Robert James.

July 3 Remained in the position of the previous night

Location of the monument to Battery K