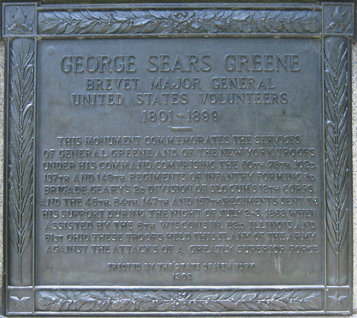 This monument commemorates the services of General Greene and of the New York troops under his command, comprising the 60th, 78th, 102d, 137th and 149th Regiments of Infantry, forming 3d Brigade, Geary’s 2d Division of Slocum’s 12th Corps, and the 45th, 84th, 147th and 157th Regiments sent to his support during the night of July 2-3, 1863, when assisted by the 6th Wisconsin, 82d Illinois and 61st Ohio, these troops held this flank of the army against the attacks of a greatly superior force.

Erected by the State of New York 1906

From the tablet on the back of the monument:

Returned to field duty March 1865, joining Sherman’s Army in North Carolina. In action at Kingston March 10, 1865, and in command of provisional division until Sherman’s Army disbanded.

George Greene was born on May 6, 1801 in Apponaug, Rhode Island. He graduated from West Point in 1819 and served in a variety of New England garrisons and as an engineering instructor at West Point until resigning in 1836 to become a civil engineer.

After rejoining the army in 1862 as colonel of the 60th New York he became a brigadier general, serving with distinction in many battles. Probably his finest hour was at Gettysburg, where his lone brigade successfully held the right flank of the Union army on Culp’s Hill. At the age of 62 Greene was the oldest Federal general on the battlefield and the second oldest from either side, behind Confederate Brigadier General William Smith.

After the war Greene returned to civil engineering, becoming president of the American Society of Civil Engineers in the 1870’s. For many years he was the oldest living graduate of West Point. He died in New Jersey in 1899 and is buried in Warwick, Rhode Island.