The monument to Company D, 2nd United States Sharpshooters (the Maine Sharpshooters) is south of Gettysburg on the road to the Slyder farm. (Tour map: Bushman Hill & Slyder Farm)

The 2nd Regiment was commanded by Lieutenant Colonel Homer R. Stoughton. It brought 204 men to the field and lost 5 killed, 23 wounded and 15 missing. 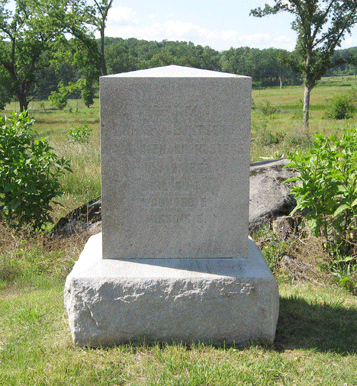 Location of the monument to the Maine Sharpshooters at Gettysburg

The monument is south of Gettysburg on Slyder Farm Lane, the driveway leading from Emmitsburg Road to the Slyder Farm. It is on the south side of the lane about 475 yards east of Emmitsburg Road.(39°47’26.3″N 77°14’58.7″W)

See more about the history of the 2nd United States Sharpshooters in the Civil War.