The monument was dedicated on August 25, 1965, honoring all members of the Confederate armed forces. It stands just over 19 feet high and depicts a charging color bearer calling for his comrades to follow. The statue stands atop a pink granite base. The base is inscribed with the names of each state that contributed men to the Confederacy, including the border states of Missouri, Maryland and Kentucky. The monument was sculpted by Donald DeLue, who also created the Mississippi and Louisiana monuments at Gettysburg. The architect was Henry Dacy.

Walter Washington Williams was the subject for the statue. He was a member of a Texas regiment who died in 1959 at the age of 117. Williams was thought to be the last living member of the armed forces of the Confederate States of America. Park officials, however, now feel that honor should belong to John B. Salling of the 25th Virginia. He died at the age of 112 in the same year. 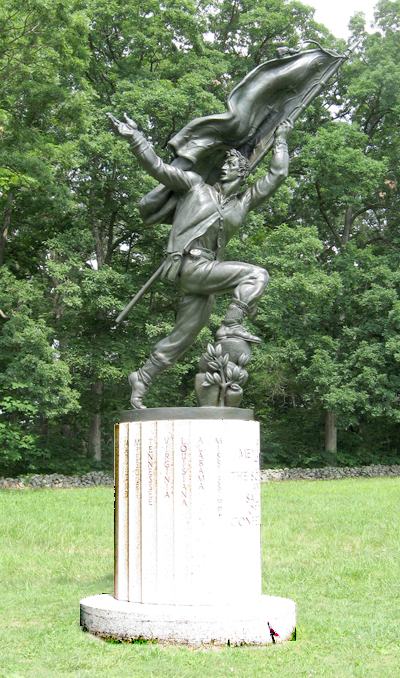 A memorial to soldiers and sailors of the Confederacy

Heroic defenders of their country. Their fame shall be an echo and a light unto eternity.

Walter Washington Williams, who was recognized by the government of the United States as the last surviving Confederate veteran, died 1959 at the age of 117 years.

Location of the Confederate Soldiers and Sailors monument at Gettysburg