State of Louisiana monument at Gettysburg

The monument is entitled “Spirit Triumphant.” It was created by Donald DeLue, who was also the sculptor of the State of Mississippi monument and the Confederate Soldiers and Sailors monument. The sculpture represents a wounded gunner of New Orleans Washington Artillery clutching a Confederate battle flag to his heart. Above him the Spirit of the Confederacy sounds a trumpet and raises a flaming cannonball.

Rear view of the Louisiana monument

Detail of the wounded gunner 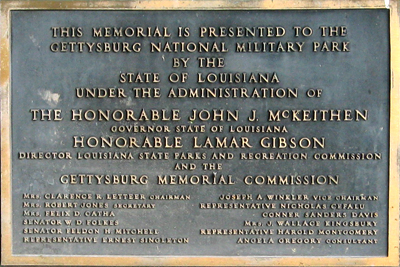 Tablet from the monument

Location of the Louisiana monument at Gettysburg