The 12th Massachusetts at Gettysburg

The 12th Massachusetts was commanded at the Battle of Gettysburg by Colonel James L. Bates, the owner of a boot and shoe company in Weymouth. He was wounded on July 1st and Lieutenant Colonel David Allen, Jr., a carpenter from Gloucester, took over. The 12th brought 301 men to the field, losing 5 killed, 52 wounded and 62 missing.

The regiment was named after its first colonel, Fletcher Webster, and in honor of his father, Daniel Webster. There is a monument to Colonel Fletcher Webster on the Manassas battlefield where he was mortally wounded in the Second Battle of Bull Run.

About the main monument to the 12th Massachusetts

The granite marker stands 10′ 9″ high, and is in the form of a cylinder on a square base with beveled corners dislaying the full moon symbol of the First Corps. A carved flag is draped around the top of the cylinder above a relief of Daniel Webster.

The equipment depicted at the base of the monument is an empty cartridge case and bayonet scabbard. It commemorates that for a time on the afternoon of July 1st the regiment ran out of ammunition and held its position with fixed bayonets alone. The monument was dedicated on October 8, 1885 by the State of Massachusetts.

Details from the front of the monument include an empty cartridge box and bayonet scabbard, commemorating how the regiment held its position on July 1st with the bayonet alone when it ran out of ammunition.

From the circle around the bust of Webster:

Liberty and Union, Now and Forever, One and Inseparable 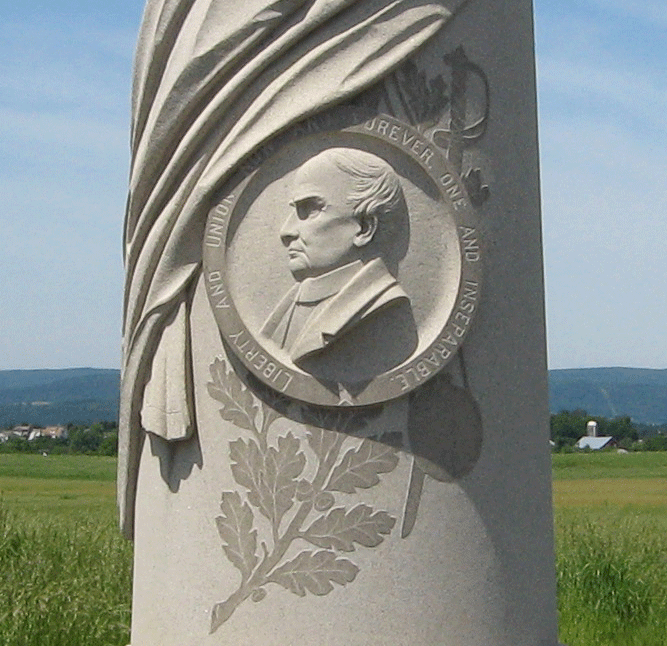 Erected by survivors of the Regiment aided by its friends and the State of Massachusetts 1885.

The main monument to the 12th Massachusetts Infantry is northwest of Gettysburg on the west side of Doubleday Avenue just north of the intersection with Robinson Avenue. (39°50’37.3″N 77°14’31.4″W)

Location of the July 2nd Marker on Hancock Avenue

The marker for the July 2nd position of the 12th Massachusetts is south of Gettysburg on the west side of Hancock Avenue at the intersection with Humphrey Avenue, just north of the First Minnesota Monument. (39°48’24.2″N 77°14’06.4″W)

From the Ziegler’s Grove marker:

Looking east across the nearly deserted parking lots after the removal of the old Cyclorama in Ziegler’s Grove at Gettysburg.
On the far side of the parking lot on the left are the State of Maryland and State of Delaware monuments.

Location of the July 3rd Marker at Ziegler’s Grove

The marker for the July 3rd position of the 12th Massachusetts is south of Gettysburg on the north side of the parking lot for the old Cyclorama Building near Taneytown Road. (39°49’01.9″N 77°14’00.3″W)