The monument is a bronze statue on a granite base. The statue is by Lawrence M. Ludke. It is of two wounded Marylanders, one Union and one Confederate, helping each other on the battlefield. It was dedicated on November 13, 1994. The back of the base of the monument has a bronze tablet listing the Maryland commands of both armies that fought at Gettysburg. 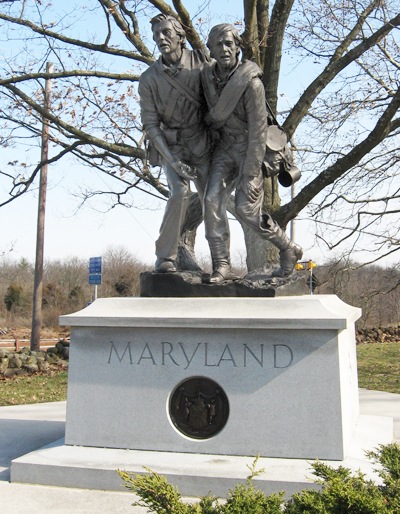 From the tablet on the back of the monument:

More than 3,000 Marylanders served on both sides of the conflict at the Battle of Gettysburg. They could be found in all branches of the army from the rank of private to major general and on all parts of the battlefield. Brother against brother would be their legacy, particularly on the slopes of Culp’s Hill. This memorial symbolizes the aftermath of that battle and the war. Brothers again, Marylanders all.

The State of Maryland proudly honors its sons who fought at Gettysburg in defense of the causes they held so dear.

Location of the Maryland Monument at Gettysburg