July 1. Gamble’s and Devin’s Brigades encountered Heth’s Division Hill’s Corps on second ridge west of Gettysburg. When 1st and 11th Corps retreated to Cemetery Hill the Cavalry took position first on the left connecting with the town and later further to the left in front of Little Round Top.

July 3. Merritt’s Brigade arrived and skirmished with the Confederate right while the 6th U. S. advanced to Fairfield and became engaged. Kilpatrick withFarnsworth’s Brigade took position on left of battle line and made a charge in the afternoon on the Confederate right but was repulsed with loss including General Farnsworth killed. Gregg’s Division on the right was attacked by Stuart’s Cavalry in the afternoon but with the aid of Custer’s Brigade Kilpatrick’s Division the attack was repulsed. 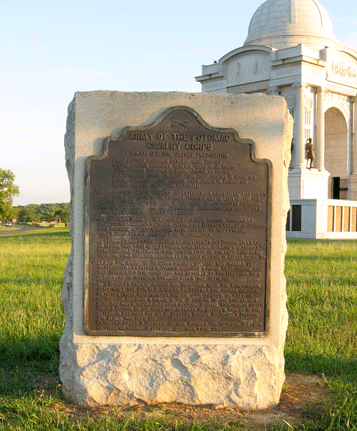