The monument to the 3rd Brigade, 3rd Division, 6th Corps is south of Gettysburg along the drive to the G. Weickert farm. (Crawford Ave. & J. Weickert Farm tour map)

July 2. Arrived about 2 P. M. and late in the day moved to the north slope of Little Round Top. On the advance of Brig. Gen. Wofford’s Brigade and others forcing First and Second Brigades Second Division Fifth Corps across Plum Run and up the west base of Little Round Top the Brigade with First Brigade Third Division Fifth Corps on the left countercharged forcing the Confederates down the hill and across Plum Run and marsh and 100 yards up the slope beyond and remained during the night having recaptured two Napoleon guns.

July 3. Assigned to the command of Brig. Gen. J. J. Bartlett in the morning and remained in the advanced position of the previous night. Late in the day supported First Brigade Third Division Fifth Corps at an interval of 200 yards in advance through the Wheatfield and the woods on the south encountering a detachment of Brig. Gen. Benning’s Brigade and the combined forces captured about 200 prisoners of that Brigade and the colors of the 15th Georgia. At dark the line was recalled to a position of a few hundred yards in advance of the original line. The Brigade sustained some loss in this movement. One Napoleon and three caissons belonging to 9th Mass. Battery recaptured.

Brigadier General Frank Wheaton commanded the brigade at the Battle of Gettysburg. Wheaton took over the division when Major General Newton was transferred to command the First Corps. Colonel David Nevin then took over command of the brigade. 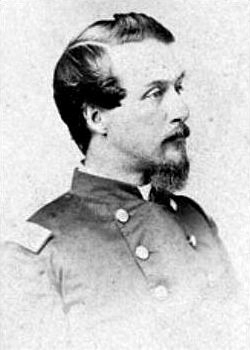