The monument to the 62nd New York Infantry is south of Gettysburg on the Wheatfield Road. (Crawford Ave. & J. Weickert Farm tour map) It was dedicated by the State of New York in 1888.

The 62nd New York was commanded at the Battle of Gettysburg by Colonel David J. Nevin, who took over brigade command on July 1st. Lieutenant Colonel Theodore B. Hamilton then took temporary command of the regiment.

The 62nd brought 237 men to the field, losing one killed and eleven wounded when it advanced into the area north and west of Little Round Top near the John Weikert farm at dusk on July 2. 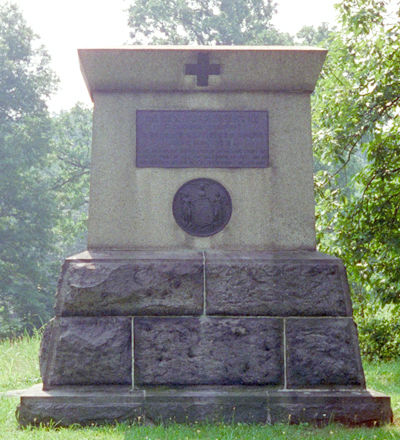 From the tablet on the rear:

On the site of this monument the Regiment under command of Lieut. Col. T. B. Hamilton charged the enemy and recaptured two guns.

Bronze tablet from the rear of the monument

Location of the monument to the 62nd New York