The monument to the 3rd Brigade, 1st Division, 12th Corps of the Federal Army of the Potomac is on Colgrove Avenue southeast of Gettysburg.

July 1. Arrived with the Division and bivouacked for the night east of Rock Creek.

July 2. After sharp skirmishing in front crossed Rock Creek and went into position. The left on Culp’s Hill the right in McAllister’s Woods a swale between. Breastworks were constructed. At sunset went to support of the left of the Army and returned and found the works on left of swale occupied by Confederates. Those on the right were unoccupied and immediately repossessed.

July 3. The 2d Mass. and 27th Indiana in the morning charged across the open swale to get possession of a stone wall and woods on the left but were repulsed with great loss the 27th Indiana falling back in a direct line the 2d Mass. towards the left. A Confederate countercharge was made across the swale but receiving a front and enfilading fire it was quickly repulsed and the Confederate force left the works and retired across Rock Creek.

July 4. The Brigade with a battery and three regiments of First Brigade made a reconnaissance in front and around through the town the Confederate forces having withdrawn to Seminary Hill. 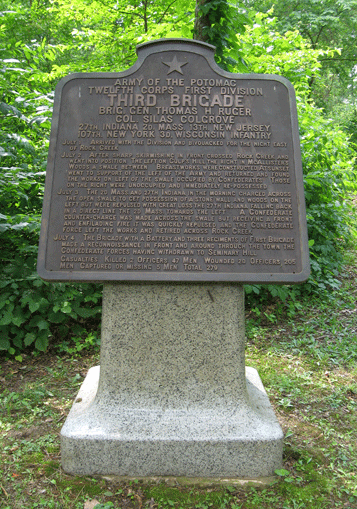 Brigadier General Thomas Ruger commanded the brigade at the Battle of Gettysburg. Ruger (West Point Class of 1854) was a Wisconsin lawyer who was originally from New York. At the beginning of the battle 12th Corps commander Henry Slocum was put in charge of the right wing of the army, giving Alpheus Williams temporary command of the corps and Ruger temporary command of the 1st Division. Colonel Silas Colgrove took over the brigade as senior colonel.

Location of the monument to the 3rd Brigade, 1st Division, 12th Corps

The monument is southeast of Gettysburg on Colgrove Avenue where it merges back together with Carman Avenue. Both avenues are one way northbound. (39°48’47.7″N 77°12’55.5″W)