The monument to the 1st Division, 12th Corps is southeast of Gettysburg on Culp’s Hill. (Tour map: South Culp’s Hill)

Brigadier General Alpheus Williams commanded the division at the Battle of Gettysburg. Williams was a lawyer and militia officer from Detroit, Michigan.

Monument to the 1st Division, 12th Corps at Gettysburg

July 1. Approaching Rock Creek on the Baltimore Pike the Division moved on a cross road to occupy Wolf Hill but retired at sunset and took position east of Rock Creek for the night. The First and Sixth Corps having been included in Gen. Slocum’s command Gen. Williams assumed command of the Corps. Gen. Ruger of the First Division and Col. S. Colgrove of the Third Brigade.

July 2. Brig. Gen. Lockwood’s Brigade joined the Corps early in the morning not having been assigned to a division was subject to the direct orders of the Corps Commander until assigned July 5th to First Division. The Division at 8 A. M. crossed Rock Creek and formed on the right of Second Division its left on Culp’s Hill the right in McAllister’s Woods. Breastworks were constructed along the line. Late in the day the Division moved to support Third Corps and Johnson’s Confederate Division advanced and occupied the vacant works.

July 3. At daylight attacked the Confederate Infantry and was hotly engaged with charges and countercharges at different points until 10:30 A. M. when the Confederate forces retired.

July 4. Early in the morning Gen. Slocum with a detachment of infantry and a battery made a reconnaissance in front to Gettysburg without opposition. 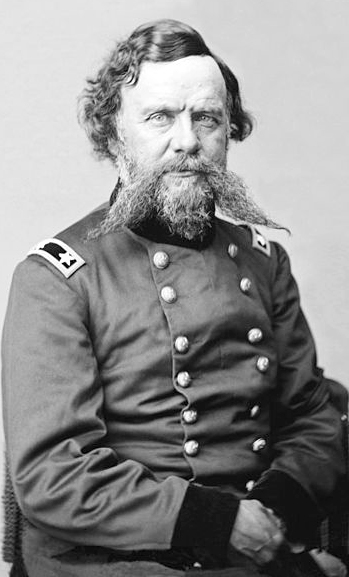 The monument is southeast of Gettysburg of Culp’s Hill. It is on the west side of Slocum Avenue about 750 feet north of the parking area at Spangler’s Spring.