The monument to the 2nd Massachusetts Volunteer Infantry Regiment is southeast of Gettysburg on Carman Avenue near Spangler’s Spring. (Spanglers Spring tour map) This was the first permanent regimental monument on the battlefield, erected in 1879.

Lieutenant Colonel Charles R. Mudge commanded the regiment at Gettysburg. Mudge was killed leading the regiment in a charge whose order he questioned but obeyed, saying, “it is murder, but it’s an order.” Major Charles F. Morse took command after Mudge fell.

Form the tablet on the front of the monument

From the hill behind this monument on
the morning of July Third 1863 the
Second Massachusetts Infantry
made an assault upon the Confederate
troops in the works at the base of Culp’s
Hill opposite. The regiment carried to
the charge 22 officers and 294 enlisted men.
It lost 4 officers and 41 enlisted
men killed and mortally wounded and 6
officers and 84 enlisted men wounded.
To perpetuate the honored memories of
that hour the survivors of the Regiment
have raised this stone. 1879. 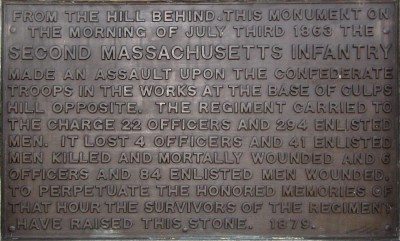 Tablet on the front of the monument.

Tablet from the rear of the monument

Location of the monument to the 2nd Massachusetts Infantry Regiment

The monument to the 2nd Massachusetts Infantry is on the south side of the Spanglers Spring area on the west side of Colgrove Avenue about 30 yards west of the its intersection with Carman Avenue. (39°48’48.0″N 77°12’57.1″W)

See more on the history of the 2nd Massachusetts Volunteer Infantry Regiment in the Civil War.
↑