The monument to the 71st Pennsylvania Volunteer Infantry Regiment is south of Gettysburg at The Angle. The 71st was also known as the “California Regiment” as it was originally sponsored and funded by citizens on the West Coast. (Hancock Avenue at The Angle tour map) 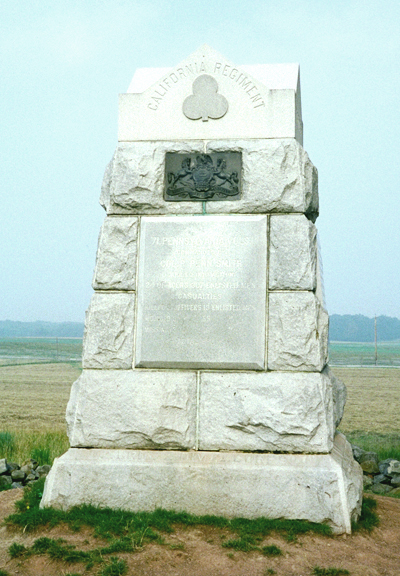 About the monument to the 71st Pennsylvania Infantry

The monument is of rough-hewn Westerly granite and stands just over 10′ tall. Polished and inscribed panels on all four sides tell the story of the regiment, and a relief of the trefoil symbol of the Second Corps is on the front and rear cap. The monument was dedicated on June 3, 1887 by the State of Pennsylvania.

The 71st Pennsylvania at Gettysburg

The 71st Pennsylvania was commanded at the Battle of Gettysburg by Colonel Richard Penn Smith. It brought 331 men to the field, losing 21 killed, 58 wounded and 19 missing.

On July 2nd the regiment played a support role in turning back Wright’s Georgia Brigade, recapturing one of the guns of Brown’s Rhode Island Battery that had been abandoned in front of the stone wall south of the Copse of Trees.

That evening the 71st was detached and sent to support the defence of Culp’s Hill. They were led in the darkness to a position in the saddle between the upper and lower summits of the hill, where they engaged in a brief firefight. Then, remarkably, Smith pulled the regiment out and marched it back to Cemetery Ridge, remarking that he would not see his men murdered. He even mentions in his official report that he did so without orders, but there seems to have been no repercussions.

It was moving from the frying pan into the fire. The 71st was at the Angle, the zigzag in the stone fence on Cemetery Ridge that was the focal point for Pickett’s Charge on July 3rd. Eight companies manned the forward stone wall and the remaining two were at the rear wall of the zigzag.

The regiment held its ground through the barrage preceding the charge and until Pickett’s Virginians were within pistol shot of the wall. But at that point most of the eight companies of veteran Pennsylvanians decided that the position could not be held, and fell back. They did so in good order and reformed a short distance up the hill in line with the two companies that had been at the rear wall.

The regiment continued the fight from there, in the open and taking heavy casualties, while the fate of the charge hung in the balance. Union reinforcements poured in from all sides and the few Confederates who had made it over the wall did so unaided. Finally the balance turned, and the 71st surged forward to their original position and Pickett’s Charge came to its bloody end.

To the left of this point on July 2, the 71st Penna. assisted in repulsing the furious attack of Wright’s Ga. Brig. During the terrific cannonading of July 3, the regiment occupied a position 60 yards in the rear of this spot, a number of the men voluntarily helping to work Cushing’s disabled Battery. As the enemy emerged from Seminary Ridge the regiment was ordered forward, the left wing to this point, the right to the right in the rear. When Pickett’s Division rushed upon the wing in overwhelming numbers it fell back into line with the right, thus bringing the whole regiment into action, with the additional use of a  large number of loaded muskets gathered from the battle field of the previous day. The Regiment captured a number of prisoners and three flags.

This Regiment was organized April 29,1861. Being the first 3 year regiment to complete its organization, it was enlisted in Philadelphia by Senator  E.D. Baker and Isaac J. Wistar by special authority from the War Department to be credited to the State of California and was known as the “California Regiment.” After the death of Colonel E.D. Baker at Ball’s Bluff, Oct. 21, 1861, it was claimed by its native state and became the 71. Pennsylvania.

The 71. Pennsylvania participated in all the principal battles of the Army of the Potomac and most of the minor ones until mustered out  at the expiration of its term of service July 2, 1864. It numbered during its service nearly 2300 men. The total loss during that period being about 1800.

Location of the monument to the 71st Pennsylvania Infantry at Gettysburg