The 73rd New York Infantry was commanded at the Battle of Gettysburg by Major Michael Burns while Colonel William R. Brewster commanded the brigade.

The regiment is also honored on the Excelsior Brigade monument a short distance away. 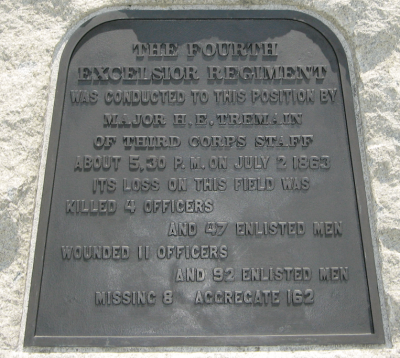 From the tablet on the right:

The Fourth
Excelsior Regiment
was conducted to this position by
Major H. E. Tremain
of Third Corps staff
about 5:30 p.m.
on July 2 , 1863
—-
Its loss on this field was
killed 4 officers
and 47 enlisted men
wounded 11 officers
and 92 enlisted men
missing 8, aggregate 162

From the tablet on the left side:

From the tablet on the rear of the monument:

This monument was erected at the instance
of the volunteer fireman of the City of New York
represented by the figure on the left.
in grateful recognition of the services rendered
by the Second Fire Zouaves on this field
in defense of the Union July 2 1863.

Location of the monument to the 73rd New York at Gettysburg