The monument to the 3rd Division, 11th Corps is north of Gettysburg on Howard Avenue. (Howard Avenue West tour map) 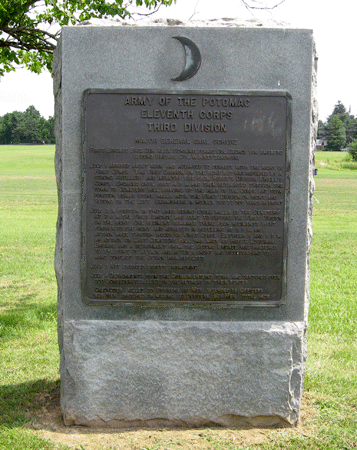 Monument to the 3rd Division, 11th Corps at Gettysburg

July 1. Arrived about noon and advanced to connect with the right of First Corps. The First Division on the right but was repulsed by a strong artillery and infantry fire from Rodes’s Division Ewell’s Corps. Engaged until past 4 P. M. and then retreated through the town to Cemetery Hill bringing up the rear of the Corps and took position behind stone walls with the First Division on right and Second on left. Skirmishers in houses 300 to 500 yards front.

July 2. In position in two lines behind stone walls of the cemetery. At 7 P. M. the First Brigade was sent to support the First Division on right. One regiment remained there four regiments went further to the right and assisted in repelling at 9 P M. an attack made through woods on First Corps. Between 8 and 9 P. M. an attack on East Cemetery Hill was made by Hays’s Louisiana Brigade and a detachment from Second Brigade was hastened to the point of attack and after a short and vigorous hand to hand conflict the attack was repulsed..

July 3. Not engaged except skirmishing.

July 4. Detachment from Division entered town and captured over 300 Confederates left on the retreat of their forces.

The monument is north of Gettysburg on the south side oh Howard Avenue. It is about 820 feet east of the intersection with Mummasburg Road.