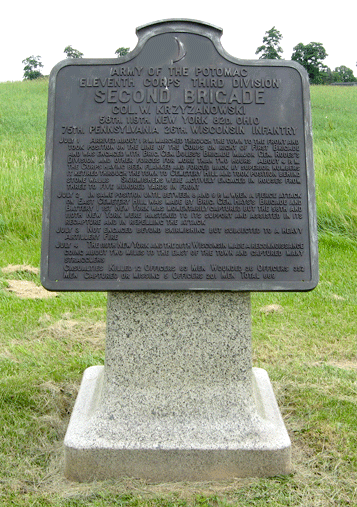 July 1. Arrived about 1 P. M. marched through the town to the front and took position on the line of the Corps on right of First Brigade and was engaged with Brig. Gen. Doles’s Brigade Major General Rodes’s Division and other forces for more than two hours. About 4 P. M. the Corps having been flanked and forced back by superior numbers it retired through the town to Cemetery Hill and took position behind stone walls. Skirmishers were actively engaged in houses from three to five hundred yards in front.

July 2. In same position until between 8 and 9 P. M. when a fierce attack on East Cemetery Hill was made by Brig. Gen. Hays’s Brigade and Battery I 1st New York was momentarily captured but the 58th and 119th New York were hastened to its support and assisted in its recapture and in repelling the attack.

July 3. Not engaged beyond skirmishing but subjected to a heavy artillery fire.

July 4. The 119th New York and the 26th Wisconsin made a reconnaissance going about two miles to the east of the town and captured many stragglers.

Colonel Wladimir Krzyzanowski (Włodzimierz Krzyżanowski) commanded the brigade at the Battle of Gettysburg. Krzyzanowski was a Polish nobleman who had left Poland after taking part in the 1848 revolution against Prussian rule. He prospered in America as a civil engineer, and was living in Washington D.C. and active in the Republican party at the start of the war.

Krzyzanowski helped organize the 58th New York Volunteer Infantry Regiment in the summer and fall of 1861 and became its colonel. Known as the “Polish Legion,” the regiment fought in the Shenandoah Valley and at Second Bull Run, where Krzyzanowski was injured when his horse fell on him. He was appointed brigadier general in November of 1862, but the appointment was not confirmed by the Senate. The regiment was in the disastrous Confederate flank attack at Chancellorsville.

After Gettysburg Krzyzanowski’s brigade was transferred to the Western Theater with the 11th Corps. After the brigade was merged into the 20th Corps, Krzyzanowski commanded Union forces at Bridgeport and Stevenson, Alabama. Krzyzanowski was promoted to brevet brigadier general in March of 1865, and mustered out in October.

Location of the monument to the 2nd Brigade, 3rd Division, 11th Corps

The monument is north of Gettysburg on the south side of Howard Avenue. It is about 600 feet east of the intersection with Carlisle Street.