The monument to Brigadier General Samuel Crawford is south of Gettysburg on the east side of Crawford Avenue. (Crawford Ave & J. Weickert Farm tour map)

The fifteen foot high bronze statue stands on top of a three foot stone base. It was created by Ron Tunison, who created a number of bronzes at Gettysburg, including the Masonic Memorial, the bas-relief from the State of Delaware monument, and Elizabeth Thorn’s statue, and the bas reliefs on the Irish Brigade monument at Antietam. The monuement was dedicated in 1988. 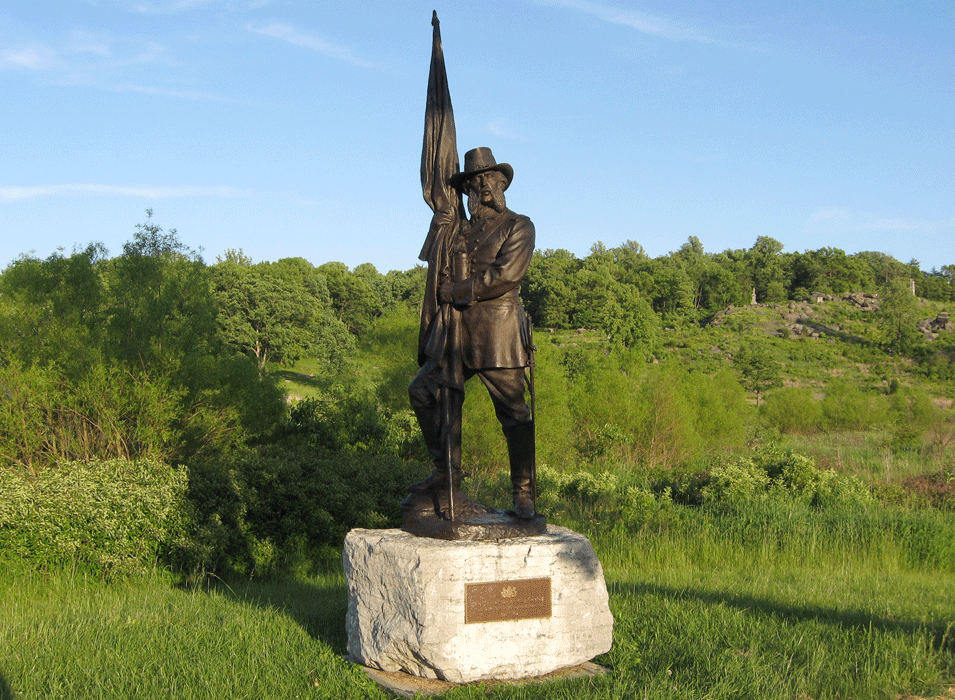 Little Round Top is in the distance behind the monument to General Crawford.

Samuel Crawford was born in 1846 in Pennsylvania. He graduated from the University of Pennsylvania in 1850 and its medical school in 1851, joining the army as an assistant surgeon.

He was serving at Fort Sumter as the Civil War began, and commanded several guns during the bombardment in spite of being medical staff. Combat command apparently appealed to him, for shortly afterwards he accepted a commission as a Major in the Infantry. By 1862 he became a Brigadier General, leading an attack at Cedar Mountain that routed the Confederate Stonewall Brigade but cost Crawford 50% casualties.

Crawford was wounded at Antietam after briefly commanding his division. He didn’t recover from the wound until May of 1863, when he was given command of the Pennsylvania Reserves, then recovering from hard campaigning by serving in the Washington defenses.

The Gettysburg crisis saw two brigades of the Reserves return to the Army of the Potomac. Crawford led them into the fighting around Little Round Top at the end of the day on July 2nd.

Crawford seized the colors of the First Pennsylvania Reserves from a surprised Corporal Bertless Slot. There was a brief struggle as the color bearer was unwilling to give up the colors for which he was responsible. Then Crawford led the division, with Corporal Slott running alongside his horse grasping his pant leg, in a charge that cleared the Valley of Death and, in his estimation, saved Little Round Top.

Crawford remained in command of his division through the Overland campaign and the Siege of Petersburg and was again wounded at the Battle of Weldon Railroad. He was with the army at Appomattox Court House, one of two men (the other General Truman Seymour) who could claim to be present at both the beginning of the war at Fort Sumter and its end at Appomattox.

After the war Crawford stayed on with the army until his retirement in 1873. He took a leading role in helping to develop Gettysburg as a memorial park. at one point purchasing land around Little Round Top to build a museum.

Samuel Crawford died in 1892 and is buried in Philadelphia.