The brigade was commanded by Brigadier General Carnot Posey, a lawyer, district attorney and Mexican War veteran from Mississippi. 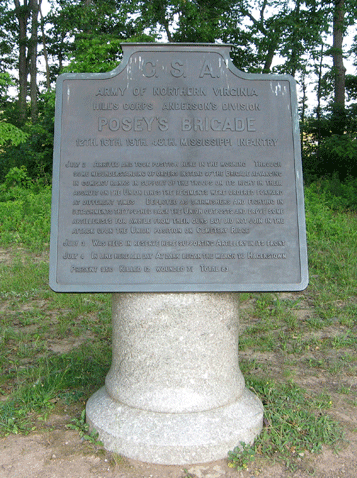 July 2. Arrived and took position here in the morning. Through some misunderstanding of orders instead of the Brigade advancing in compact ranks in support of the troops on its right in their assault on the Union lines the regiments were ordered forward at different times. Deployed as skirmishers and fighting in detachments they pushed back the Union outposts and drove some artillerists for awhile from their guns but did not join in the attack upon the Union position on Cemetery Ridge.

July 3. Was held in reserve here supporting artillery in its front.