There are two monuments to the 29th Pennsylvania Volunteer Infantry Regiment on the Gettysburg battlefield. Both are a short distance apart southeast of Getysburg on Culp’s Hill along Slocum Avenue.

The 29th Pennsylvania Infantry was commanded at the Battle of Gettysburg by Colonel William Rickards of Philadelphia. It brought 485 men to the field, losing 15 killed, 43 wounded and 8 missing. 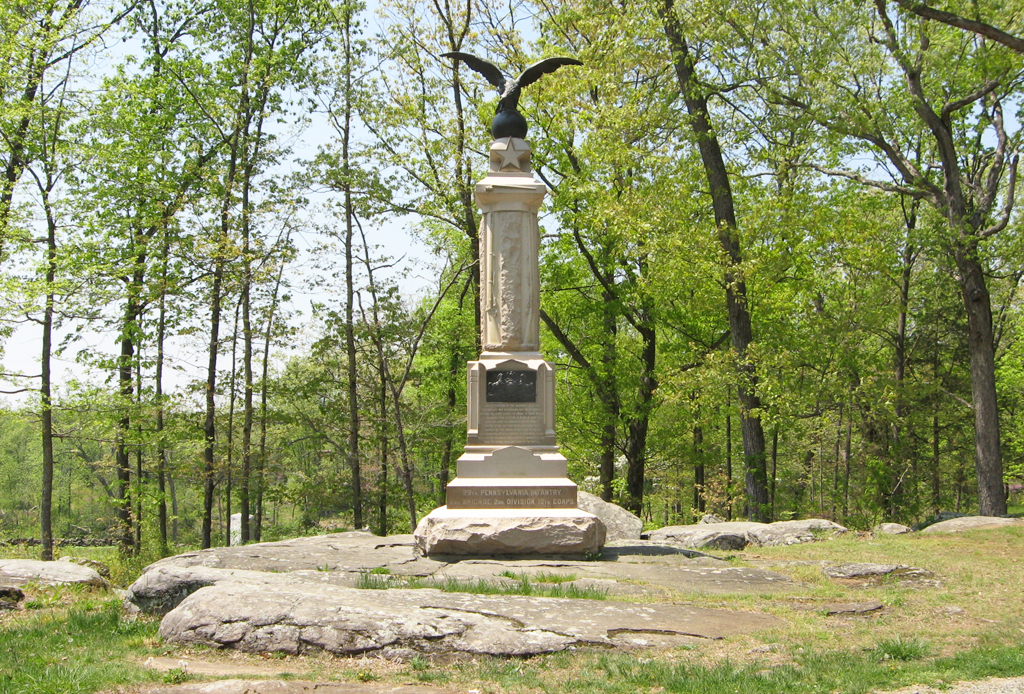 The larger monument was the second monument erected to the regiment at Gettysburg. It was dedicated in 1889 when funds were made available by the State of Pennsylvania.  (South Culp’s Hill tour map)

July 2. Position of the Regiment. At 7 p.m.
the Brigade was withdrawn, and on returning
during the night found the enemy in these works
the Regiment took position in rear of this line
with its right as indicated by the tablet
erected to the left and rear; and from there
a charge of the enemy at day light of the 3rd
was repulsed after a contest of over seven hours
in which the regiment participated it reoccupied and
held the works until the close of the battle.

From the left side of the main monument:

From the right side of the main monument:

The main monument to the 29th Pennsylvania is south of Gettysburg on the west side of Slocum Avenue just before the loop down to Geary Avenue. Slocum Avenue is one way northbound. (39°48’59.3″N 77°13’06.3″W)

The smaller monument is about 160 yards to the west. It was the first monument to the regiment on the battlefield, erected in 1885 by the regimental association. (South Culp’s Hill tour map)

From the front of the smaller monument:

From the right side of the smaller monument:

From the left side of the smaller monument:

From the rear of the smaller monument:

The secondary monument to the 29th Pennsylvania is south of Gettysburg 30 yards west of Slocum Avenue just before the intersection with Williams Avenue. Slocum Avenue is one way northbound. (39°49’00.8″N 77°13’12.1″W)