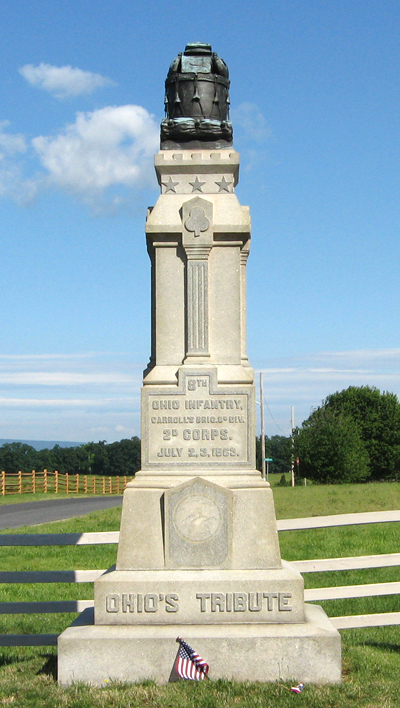 Monument to the 8th Ohio Infantry at Gettysburg

About the monument to the 8th Ohio

The granite monument is 12′ 4″ tall and is topped with a bronze representation of a drum with a cap, knapsack, canteen, and blanket roll. It was dedicated on September 14, 1887 by the State of Ohio.

The 8th Ohio Infantry at the Battle of Gettysburg

Lieutenant Colonel Franklin Sawyer commanded the 8th Ohio Infantry at the Battle of Gettysburg. The regiment brought 209 men to the field.

On July 2nd the regiment was posted as skirmishers roughly in the area of the monument. They battled with Confederates along Emmitsburg Road that day and up until the artillery bombardment preceding Longstreet’s Assault, better lnown known as Pickett’s Charge.

Well advanced and isolated from the Union line and watching over 13,000 Confederates advancing toward them, the 200 Ohioans attacked. They struck the exposed flank of Brockenbrough’s Virginia Brigade as it went by, sending them to the rear in disorder, then continued to disrupt the northern flank of Pettigrew’s and Trimble’ men until the charge collapsed. It was a major, if little appreciated, factor in the success of the Union defence.

The 8th Ohio Infantry under Lieut. Col. Franklin Sawyer took this position at 4 p.m. July 2 after a brisk skirmish and held it July 2 and 3 during Longstreet’s assault. July 3, the regiment advanced and by left wheel attacked the enemy in flank, capturing three flags and numerous prisoners.

The 8th Ohio Infantry was organized for 3 months April 29, and for 3 years June 24, 1861. Took part in the battles of  Romney, Winchester 1862 South Mountain, Antietam, Frdericksburg, Gettysburg, Wilderness, Spottsylvania, Cold Harbor,  Petersburg  and many other important engagements. Was mustered out July 13, 1864.