The monument to the 95th New York Volunteer Infantry Regiment is west of Gettysburg on Reynolds Avenue south of the Railroad Cut. (North Reynolds Avenue tour map) It was dedicated on July 1, 1893 by the State of New York. Markers also show the regiment’s location on Stone Avenue, at the corner of Doubleday and Wadsworth Avenues, on the corner of Chambersburg Pike and Seminary Avenue, and on the summit of Culp’s Hill. 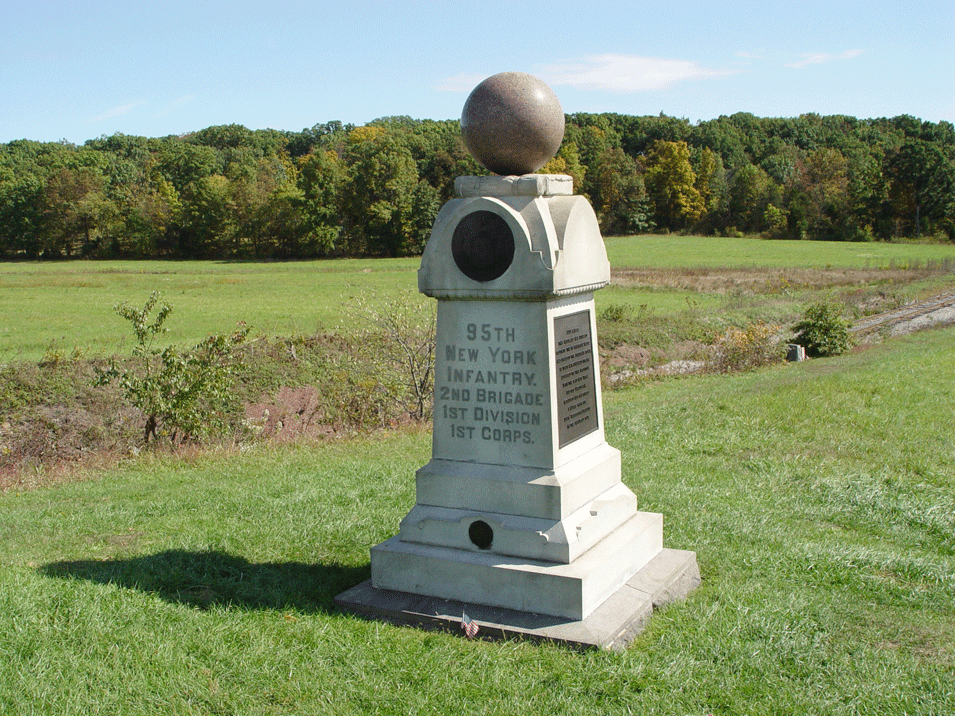 The 95th New York Volunteer Infantry Regiment was commanded at the Battle of Gettysburg by Colonel George H. Biddle. He was wounded on July 1st and Major Edward Pye took command.

The 95th New York brought 261 men to the field. It was one of the first Union infantry regiments to reach the battlefield, originally forming line of battle at 10 a.m. on July 1st at the site of the marker on Stone Avenue. But within a short time the Confederates of Davis’ Brigade were starting to flank the Union position by moving through the railroad cut north of Chambersburg Pike. The 95th New York joined in a charge which drove them out, inflicting heavy losses.

The regiment reformed north of the cut at the site of the noon marker. But continuing Confederate pressure forced the Union line back to the area around the Seminary shown by the 4 p.m. marker, where the 95th supported the final First Corps artillery line before retreating through Gettysburg to Cemetery Hill.

After reforming south of Gettysburg the regiment was sent to Culp’s Hill, which it helped defend on July 2nd and 3rd.

The monument stands 12′ tall, made of white granite topped with a sphere of polished Thousand Islands red granite. The sphere, the full moon symbol of the First Corps, rests on a carved granite knapsack. A smaller round First Corps symbol is on the front base of the monument. A bronze tablet of the Seal of the State of New York is on the top front, with bronze text tablets on the right and left sides.

From the tablet on the left (north) side:

July 1, 1863.
This Regiment was formed south of the McPherson House and engaged the enemy at 10 a.m. at 10:30 a.m. changed front. Advanced to this position with the 84th New York and 6th Wisconsin. Repulsed and captured a large part of Davis’ Mississippi Brigade in the railroad cut.

From the tablet on the right (south) side:

Retired from that position to Culp’s Hill, where it remained during July 2nd and 3rd

The marker is on the east side of Stone Avenue about 150 yards south of US 30. (Stone & Meredith Avenues tour map)

Marker on Stone Avenue showing the regiment’s position at 10 a.m. on July 1

From the Stone Avenue marker:

The marker is at the very south end of Doubleday Avenue where it turns west and becomes Wadsworth Avenue.

From the Doubleday Avenue marker:

From the Seminary Avenue marker:

From the Culp’s Hill marker: