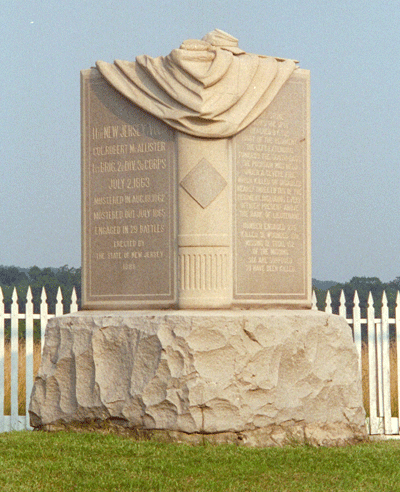 About the monument to the 11th New Jersey

The granite monument is 9′ tall. It is in the form of an open book standing on a rough base. A flag drapes on the top and reverse of the book, topped with a soldier’s hat. The regiment’s information is inscribed on the covers of the book, and the spine has a relief of the diamond symbol of the Third Corps.

The 11th New Jersey at Gettysburg

Colonel Robert McAllister commanded the regiment at the Battle of Gettysburg. Colonel McAllister was wounded on July 2nd. Major Philip Kearney had already been mortally wounded, and Captain Luther Martin of Company D took over command of the regiment. He was wounded in the foot, and while trying to make his way to the rear was wounded again in the thigh and chest, the latter being mortal. Captain William Loyd then briefly took command until he, too, was wounded. Lieutenant John Schoonover took over until late in the afternoon when he was also wounded, with the regiment ending the day under the command of Captain Samuel T. Sleeper.

The 11th New Jersey brought 275 men into battle. Over half of those were killed or wounded.

Lieutenant Schoonover in his report singled out Corporal Thomas Johnson who, after two color bearers had been shot and with officers and men falling by the moment, was ordered to take the colors and advance twenty yards to the front to steady the regiment. He did, holding his ground until the survivors of the regiment were ordered to slowly and stubbornly fall back.

From the left face (north side) of the monument

Right side of the monument

From the right face (south side)

This stone marks the spot reached by the right of the regiment the left extending towards the south-east. The position was held under a severe fire which killed or disabled nearly three-fifths of the regiment, including every officer present above the rank of lieutenant.

Left side of the monument

Detail from the monument

See more on the history of the 11th New Jersey Volunteer Infantry Regiment in the Civil War.