Main monument to the 1st Minnesota Infantry Regiment at Gettysburg

The 1st Minnesota Infantry performed one of the most critical actions of the battle during Longstreet’s Assault of July 2nd. Sickles’ Corps was falling back in disarray. Longstreet’s men were advancing to penetrate the center of the Union line, which had been dangerously thinned to prop up other sectors. General Hancock rode up to the 1st Minnesota, the only organized Union troops at hand, pointed at the advancing Confederates, and ordered them to “Take those colors!” Their sacrificial charge against overwhelming odds halted the Confederate advance. It bought desperately needed time for the center of the Union line to reform. the result was that Lee was forced into one last desperate gamble the next day with Pickett’s Charge.

The regiment entered the field 420 strong. Company L’s 32 men served as skirmishers and Company C’s 56 men were detached on July 2.

Colonel William Colvill, an attorney and newspaper owner from Red Wing, led the men into action. He was wounded during the July 2 charge. Captain Nathan Messick took over command only to be killed the next day during the repulse of Pickett’s Charge. Captain Wilson B. Farrell briefly took over until he was also killed. Finally Captain Henry C. Coates took over command. The regiment lost 50 men killed, 173 wounded and 1 missing.

Main monument to the 1st Minnesota 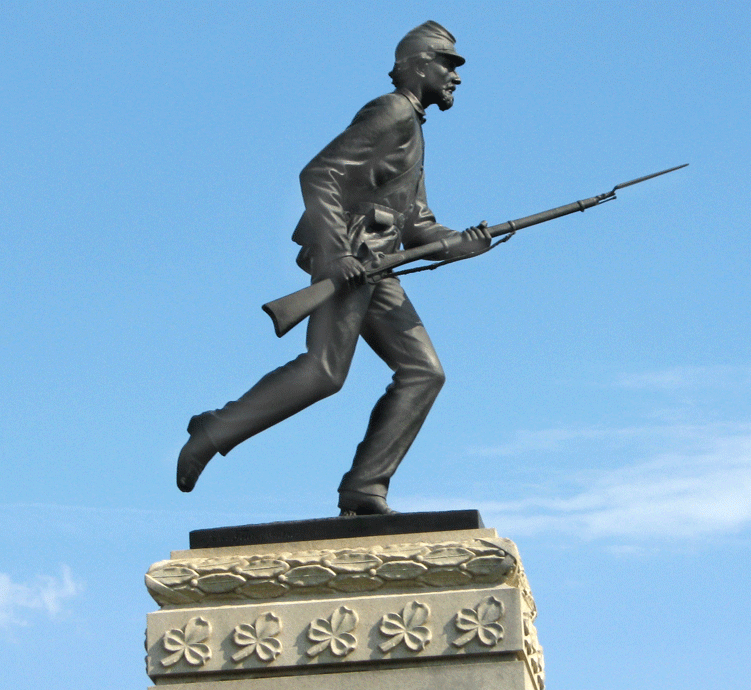 On the afternoon of July 2, 1863 Sickles Third Corps having advanced from this line to the Emmitsburg road eight companies of the First Minnesota regiment numbering 262 men were sent to this place to support a battery. Upon Sickles’ repulse as his men were passing here in confused retreat two Confederate brigades in pursuit were crossing the swale.To gain time to bring up the reserves and save this position General Hancock in person ordered the eight companies to charge the rapidly advancing enemy.

The order was instantly repeated by Col. Wm. Colvill and the charge instantly made down the slope at full speed through the concentrate fire of the two brigades breaking with the bayonet the enemy’s front line as it was crossing the small brook in the low ground. There the remnant of the eight companies nearly surrounded by the enemy held its entire force at bay for a considerable time and till it retired on the approach of the reserve the charge successfully accomplished its object. It saved the position and probably the battlefield.

The loss of the eight companies in the charge was 215 killed and wounded, more than 85 percent. 47 men were still in line and no missing. In self-sacrificing desperate valor this charge has no parallel in any war. The next day the regiment participated in repelling Pickett’s charge losing 17 more men killed and wounded.

The main monument to the 1st Minnesota infantry is on Hancock Avenue. It is due south of the Pennsylvania memorial at the intersection of Hancock Avenue and Humphreys Avenue.

Secondary Monument to the 1st Minnesota 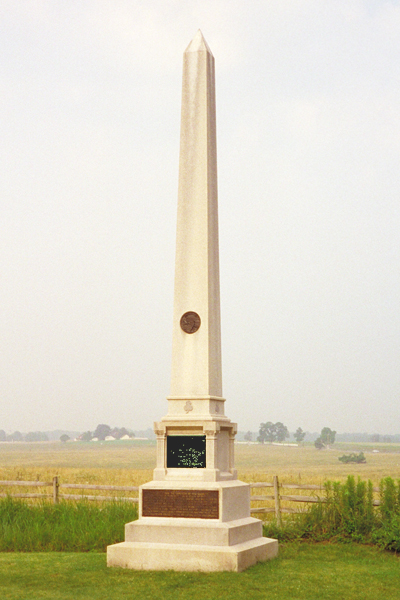 From the smaller secondary monument:

On July 3d, 1863 the survivors of this regiment (see large monument 1/3 mile south of this) aided here in repelling Picketts Charge and ran hence to the aid of Webb’s Brigade taking a conspicuous part in the counter-charge which successfully ended the conflict. Losing then 17 additional killed and wounded and capturing a Confederate flag. There Captains Nathan S. Messick and Wilson B. Farrel successively commanding the regiment were killed. Total killed and wounded in the battle 232 out of 330 engaged.”

A smaller secondary monument to the 1st Minnesota is 1/3 mile north of the main monument. It is on the west side of Hancock Avenue south of the United States Regulars monument.

Memorial Urn to the 1st Minnesota in the National Cemetery

Urn honoring the 1st Minnesota Infantry in the National Cemetery

From the front of the Urn:

From the rear of the Urn:

The surviving members First Regiment Minnesota Infantry.
To the memory of their late associates who
“died on the field of honor”
at Gettysburg July 1863.

From the sides of the Urn:

These dead shall not have died in vain.
“All time is the millenium of their glory.“

Location of the Urn to the 1st Minnesota at Gettysburg

The memorial urn is in the National Cemetery west of the Soldiers National Monument. It is between the first and second rows of headstones.