The monument to the 6th Corps Artillery Brigade is south of Gettysburg on the east side of Sedgwick Avenue. (Sedgwick Avenue tour map)

Monument to the 6th Corps Artillery Brigade at Gettysburg

July 2. Arrived in the afternoon and evening from Manchester Md. and the artillery was placed under the orders of Brig. Gen. H. J. Hunt Chief of Artillery of the Army

July 3. The batteries were placed in reserve on different portions of the field so as to be available but with exception of 1st New York Battery were not actively engaged.

Colonel Charles H. Tompkins commanded the brigade at the Battle of Gettysburg. Tompkins attended West Point (West Point Class of 1851) but did not graduate. He served as a enlisted man in the First Dragoons. Tompkins was awarded the Medal of Honor for his heroism at Fairfax Court House in 1861. 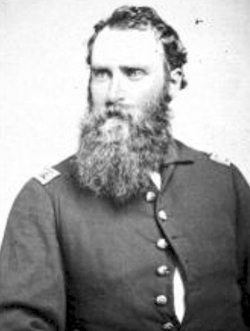 The monument is south of Gettysburg on the east side of Slocum Avenue. It is just to the south of the intersection with United States Avenue across from the George Weickert farm.