Colonel Charles S. Wainwright commanded the brigade at the Battle of Gettysburg. He was a prosperous produce farmer from New York. Wainwright kept a diary of his Civil War years (A Diary Of Battle: The Personal Journals Of Colonel Charles S. Wainwright, 1861-1865) that was finally published in 1962. It is filled with well written observations of the army’s battles and leaders and it is considered one of the best diaries to come out of the war. 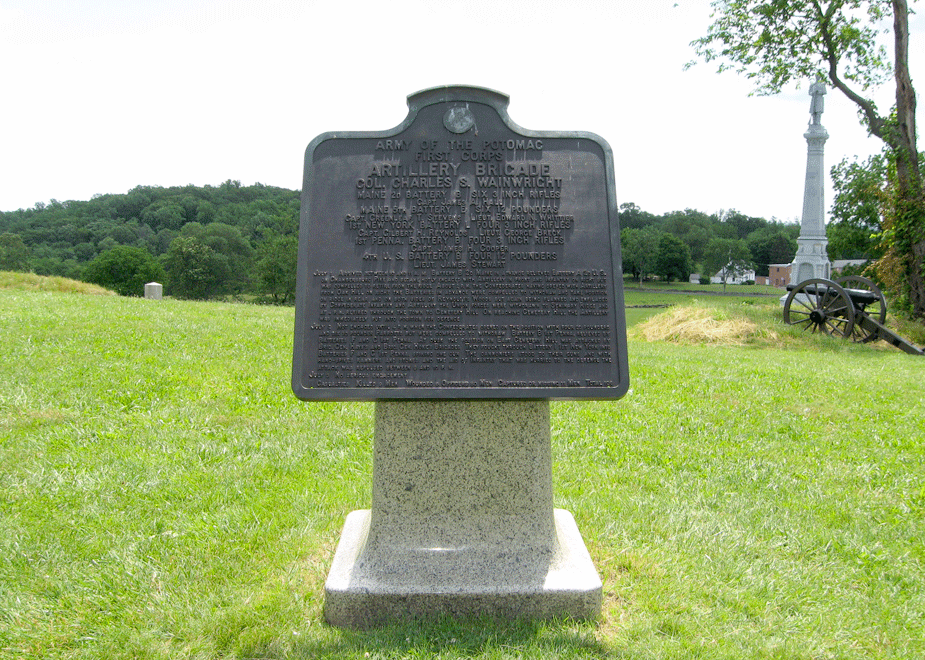 Monument to the 1st Corps Artillery Brigade at Gettysburg

July 1. Arrived between 10 and 11 A. M. Battery B 2d Maine in advance relieved Battery A 2d U. S. on Chambersburg Pike and became hotly engaged with artillery in front and infantry on right but was compelled to retire from the ridge. About 2 P. M. the Confederates having opened with artillery from Oak Hill on right the batteries in advance were compelled to withdraw and take position on ridge in rear and on both sides of Reynolds Woods but again being flanked and enfiladed by Confederate infantry and artillery the Union forces were withdrawn to Seminary Ridge and at 4 P. M. retired through the town to Cemetery Hill. On reaching Cemetery Hill the artillery was immediately put into position for defence.

July 2. Not engaged until 4 P. M. when the Confederates opened on the position with four 20 Pounders and six 10 Pounder Parrotts but were compelled to withdraw. Battery B 1st Penna. relieved by Batteries F and C 1st Penna. At dusk the position on East Cemetery Hill was attacked by Brig. Gen. Hays’s and Brig. Gen. Hoke’s Brigades.They fought through Battery I 1st New York into Batteries F and C 1st Penna. spiking one gun. The cannoniers stood to their guns and with handspikes rammers and stones and the aid of infantry that was hurried to the defence the attack was repulsed between 9 and 10 P. M.