The monument to the 2nd Volunteer Brigade of the Army of the Potomac’s Artillery Reserve is south of Gettysburg on the west side of Baltimore Pike, 130 feet southeast of the Evergreen Cemetery gatehouse. (East Cemetery Hill tour map)

The two Connecticut heavy artillery batteries in the brigade were left behind at Westminster, Maryland as it was believed they would not be suitable for the rapid movements of the campaign. However, Brigadier General Henry Hunt, Chief of Artillery for the Army of the Potomac, regretted not bringing them and felt they would have done good service. 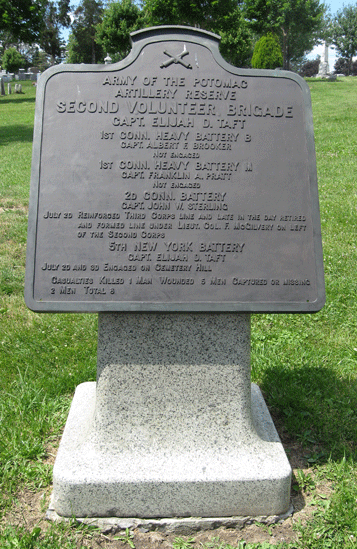 Monument to the 2nd Volunteer Brigade, Artillery Reserve, Army of the Potomac

July 2 and 3. Engaged on Cemetery Hill.

Captain Elijah D. Taft commanded the brigade at Gettysburg. Taft was a state legislator and militia officer from Brooklyn. He joined the 5th New York Light Artillery Battery in August of 1861 and mustered in as its captain in November. He commanded the battery through the Peninsula Campaign, Second Manassas, Antietam, Fredericksburg and Chancellorsville. After Chancellorsville the Army of the Potomac Reserve Artillery was organized into brigades. Taft was given command of the 2nd Volunteer Brigade and led it until May of 1864, when he return to command of the battery. Except for a short time in September of 1864 when he commanded the 19th Corps reserve artillery, Taft commanded the battery until the end of the war.