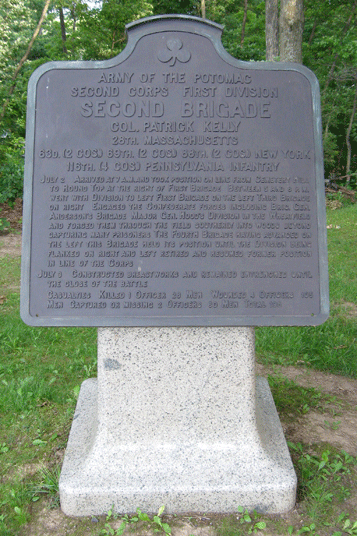 July 2. Arrived at 7 A. M. and took position on line from Cemetery Hill to Round Top at right of First Brigade. Between 5 and 6 P. M. went with Division to left First Brigade on the left Third Brigade on right. Engaged the Confederate forces including Brig. Gen. Anderson’s Brigade Major Gen. Hood’s Division in the Wheatfield and forced them through the field southerly into woods beyond capturing many prisoners. The Fourth Brigade having advanced on the left this Brigade held its position until the Division being flanked on right and left retired and resumed former position in line of the Corps.

July 3. Constructed breastworks and remained entrenched until the close of the battle.