The battery was commanded at Gettysburg by Captain John W. Lewis. 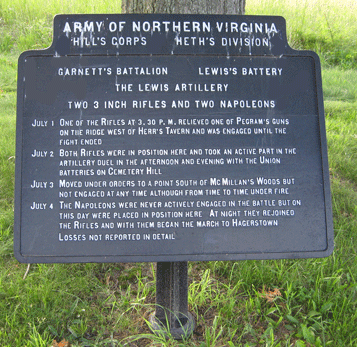 Text from the marker:

July 1. One of the Rifles at 3.30 P. M. relieved one of Pegram’s guns on the ridge west of Herr’s Tavern and was engaged until the fight ended.

July 2. Both Rifles were in position here and took an active part in the artillery duel in the afternoon and evening with Union batteries on Cemetery Hill.

July 3. Moved under orders to a point south of McMillan’s Woods but not engaged at any time although from time to time under fire.

July 4. The Napoleons were never actively engaged in the battle but on this day were placed in position here. At night they rejoined the Rifles and with them began the march to Hagerstown.

See more about the history of the Lewis Battery (Pittsylvania Artillery) in the Civil War.