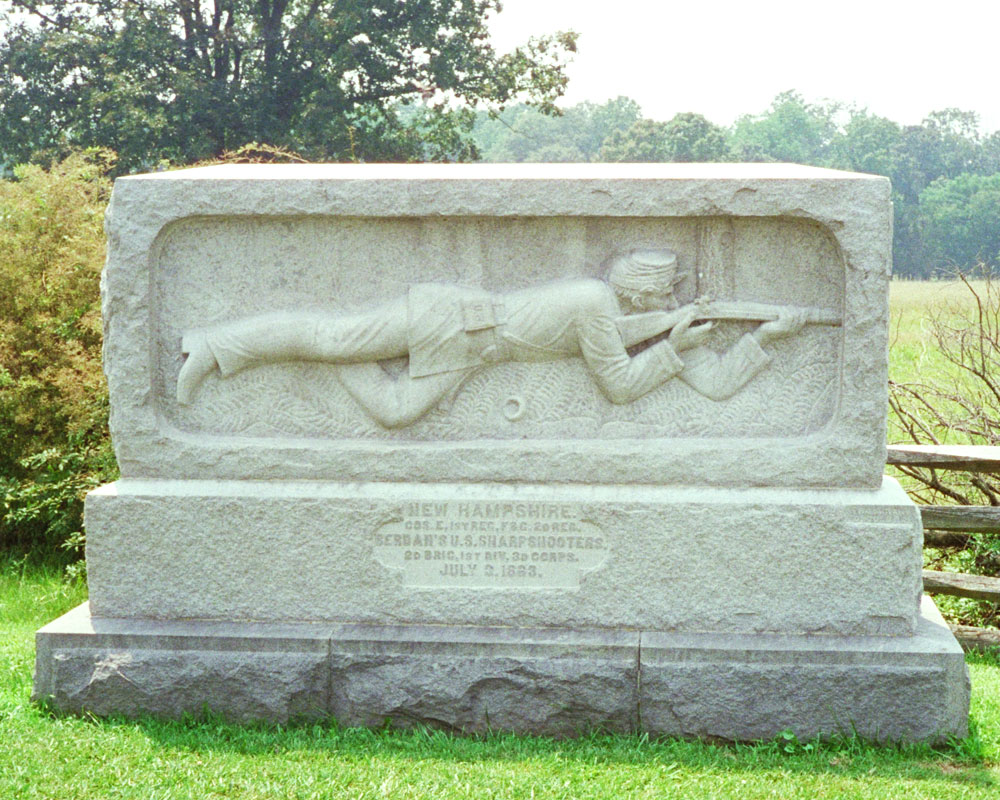 Monument to the New Hampshire Sharpshooters at Gettysburg

Colonel Hiram Berdan’s two regiments of sharpshooters were unique in the Union army. They had different uniforms and used different weapons, equipment and tactics than the “line units”. Although operating as United States Army units, each company within the regiments was formed of recruits from a single state. After the war the states (Maine, Michigan, Minnesota, New Hampshire, New York, Pennsylvania, Vermont and Wisconsin) erected monuments to their respective companies. Three companies of sharpshooters were recruited from New Hampshire, divided between the two regiments.

Colonel Berdan commanded the 1st Regiment at Gettysburg. When General Birney was wounded and General ward moved up from brigade to division command during the fightin on the afternoon of July 2 Colonel Berdan took command of the brigade. Lieutenant Colonel Casper Trepp then took over the regiment. The 1st Sharpshooters brought 371 men to the field and lost 6 killed, 37 wounded and 6 missing.

Homer R. Stoughton commanded the 2nd Regiment at Gettysburg. It brought 204 men to the field and lost 5 killed, 23 wounded and 15 missing.

Location of the monument to the New Hampshire Sharpshooters

The monument to the New Hampshire Sharpshooters is south of Gettysburg on the west side of Hancock Avenue just south of the intersection with Pleasonton Avenue. (39°48’29.1″N 77°14’10.3″W)