The battery was commanded at the Battle of Gettysburg by Captain Robert B. Ricketts. It brought 144 men to the field serving six Ordnance Rifles, and suffered 6 killed, 14 wounded and 3 missing. The battery was assigned to the 3rd Volunteer Brigade of the Artillery Reserve. 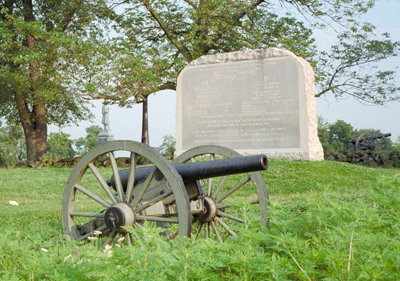 July 2nd. Reached the field and took this position in the afternoon
and engaged the Rebel batteries on Benner’s Hill.
8 p.m. A Rebel column charged the Battery and a desperate hand-to-hand conflict
ensued which was repulsed after every round of canister had been fired.

July 3rd. Engaged with the Rebel batteries on the left and centre of the line.

Location of the monument to Batteries F&G, 1st Pennsylvania Artillery

The monument to Pennsylvania Consoldiated Batteries F and G is south of Getysburg on East Cemetery Hill, about 88 yards east of Baltimore Pike and bewteen the equestrian monuments to General Hancock and General Howard. (39°49’17.8″N 77°13’43.4″W)