The monument to the 15th and 50th New York Engineers is south of Gettysburg on Pleasonton Avenue northeast of the Pennsylvania State Monument. (Tour map: Pleasonton Avenue tour map) It was dedicated by the State of New York in 1890.

The monument honors New York’s two engineer units, the only volunteer engineer units with the Army of the Potomac. The monument is in the shape of the castle that is the traditional symbol of the United States Army Corps of Engineers.

Much of the 15th New York Engineers had mustered out on June 28, 1863 at the end of their term of service, leaving a battalion of three companies. It was commanded during the Gettysburg campaign by Major Walter L. Cassin.

The 50th New York was commanded during the Gettysburg campaign by Colonel William H. Pettes (USMA 1832). Along with a small battalion of U.S. Regulars under Captain George H. Mendell, the Engineer Brigade numbered 946 men.

Neither unit was on the battlefield at Gettysburg. They had built and maintained the pontoon bridges that allowed the army to cross the Potomac River, and were at Beaver Dam Creek, Maryland on July 1 when they were ordered to Washington D.C. Pleasonton Avenue is the site of monuments to a number of units that participated in the Gettysburg campaign but were not at the actual battle.

The Engineers were attached directly to the Headquarters of the Army of the Potomac.

15th New York Engineers.
Mustered in June 17th, 1861.
Mustered out July 2nd, 1865.
Participated in all of the campaigns
of the Army of the Potomac,
ending at Appomattox. 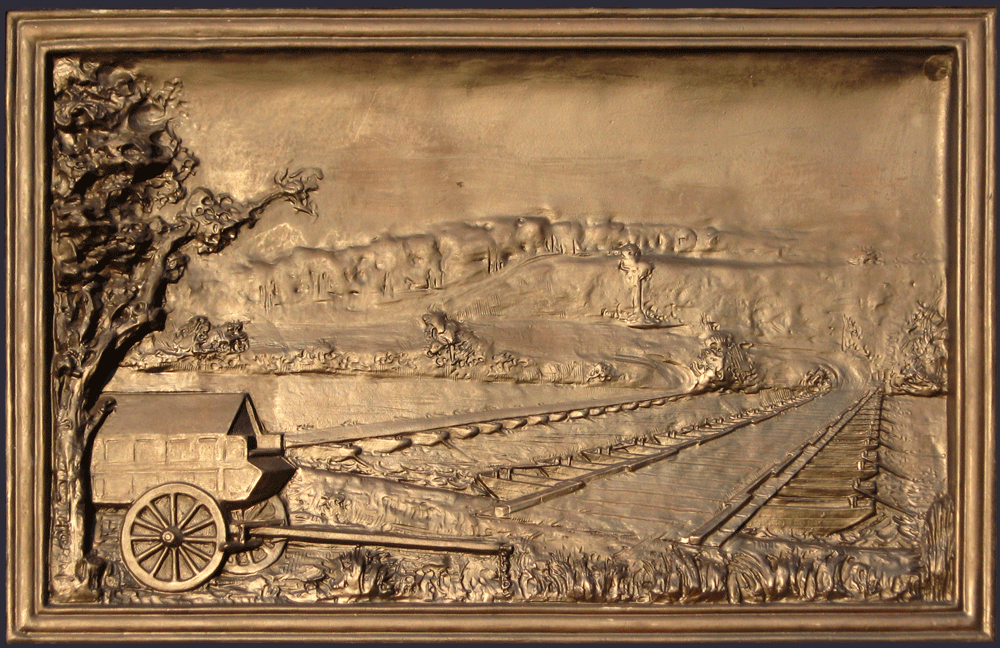 Bronze bas-relief from the monument

50th New York Engineers.
Mustered in Sept. 18th, 1861.
Mustered out June 13th, 1865.
Participated in all the campaigns
of the Army of the Potomac,
ending at Appomattox.

Detail from the monument, the distinctive Engineer’s uniform button with the Engineers’ motto, Essayons, “Let us try”